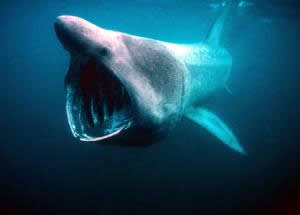 A new study has shown that basking sharks are being killed for their fins. Credit: Sally Sharrock

MIAMI, Florida -- Despite regulations by some countries to protect the behemoth basking shark from further population declines, a new study published in the current on-line edition of Animal Conservation reports that the world’s second largest fish is still being killed for its high-priced fins.

Scientists from the Guy Harvey Research Institute at Nova Southeastern University and the Pew Institute for Ocean Science at the University of Miami, both in Florida, and from England’s Imperial College and Durham University used a novel, streamlined DNA analysis method to document the presence of fins from basking sharks in the Hong Kong and Japanese fin markets, and even in the USA where this species has been completely protected by fishery regulations since 1997.

“The demand for basking shark fins, which can fetch prices in excess of $50,000 (USD) for a single large fin, is continuing to drive the exploitation, surreptitious and otherwise, of this highly threatened species,” says Mahmood Shivji, Ph.D., director of the Guy Harvey Research Institute (GHRI), who led the research. “This finding, along with our recent research documenting extremely low genetic diversity in basking sharks worldwide, raises urgent concerns about the longer-term health of this species.”

Growing up to 40 feet long, the filter-feeding basking shark is considered to be extremely vulnerable to fishing pressure, perhaps more so than most sharks, because it grows slowly, matures late, and has low numbers of offspring, resulting in naturally small populations. Historical commercial fishing for its meat and vitamin-rich liver oil frequently resulted in rapid collapses of its populations. Because of concerns about its vulnerability and downward trajectory of its stocks, the basking shark is protected from landing and trade by national legislation in the waters of several countries. It is listed as “Endangered” by the World Conservation Union (IUCN) in parts of its range and on Appendix II of CITES (The Convention on International Trade in Endangered Species).

“Our findings suggest that preventing worldwide collapse of basking shark populations will require expanded protection for this vulnerable species and better enforcement of existing fisheries and trade rules,” says Ellen Pikitch, Ph.D., a co-author and executive director of the Pew Institute for Ocean Science at the University of Miami Rosenstiel School of Marine and Atmospheric Science.

One of the major problems with monitoring the trade in shark products to prevent exploitation of protected species is the difficulty in identifying detached body parts and processed products accurately to species-level. The rapid and low-cost DNA forensics test for basking sharks developed and used by Shivji and colleagues generates a simple, DNA fingerprint unique to basking sharks.

“The simple-to-use DNA forensics test developed and used by the research team should make it more efficient to screen large numbers of shark products in the trade stream, making detection of basking shark products and assessment of compliance with national fisheries and international CITES regulations much easier in the future,” according to Jennifer Magnussen, the paper’s lead author and a graduate student at GHRI.