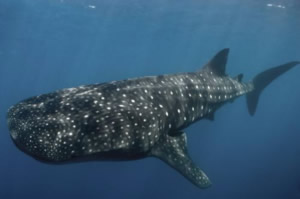 "We have seen that protecting sharks helps our environment and our people," said Honduran Vice President MarÃ­a Antonieta Guillen de Bogran, who also attended the announcement. "When tourists come to Roatan and other destinations, they spend money to see the sharks. But these animals don't just help the Honduran economy. Our coral reefs and marine environment thrive because these apex predators are safe in our waters. Today's declaration will help us all, underwater and on land, for generations to come."

"Honduras has now set a conservation standard that other countries in the Americas should emulate," said Jill Hepp, manager of Global Shark Conservation for the Pew Environment Group. "More and more, world leaders are realizing that, in addition to their value to the ecosystem, sharks are worth more alive -- for diving, snorkeling and watching -- than dead."

President Lobo Sosa signed legislation that established the sanctuary at an event hosted by the Pew Environment Group on the Honduran island of Roatan. He also joined other government representatives from Central America to observe shark research off the coast.

"Because of overfishing and the global fin trade, scientists estimate that up to 73 million sharks are killed every year," said Maximiliano Bello, senior adviser to the Pew Environment Group in Latin America. "This action taken by Honduras today, along with the future actions it will inspire, will help immensely in lowering this unsustainable catch."

In September 2010, President Lobo Sosa joined President Johnson Toribiong of the Pacific island nation of Palau at the United Nations to challenge other world leaders to save sharks, stop the practice of finning and end global overfishing of the species. Palau established its shark sanctuary in 2009.

The Pew Environment Group is the conservation arm of The Pew Charitable Trusts, a nongovernmental organization that works globally to establish pragmatic, science-based policies that protect our oceans, preserve our wildlands and promote clean energy. www.PewEnvironment.org/Sharks