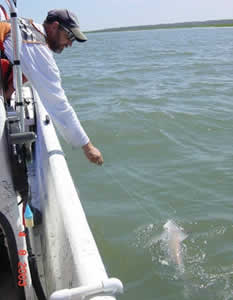 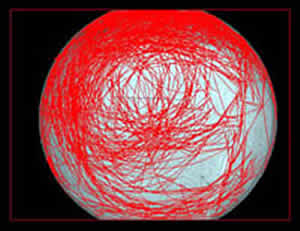 Swimming pattern (red lines) of a sandbar shark with lead fishing weights suspended in the tank at the 5 o’clock positon. Credit: Leonie Smith 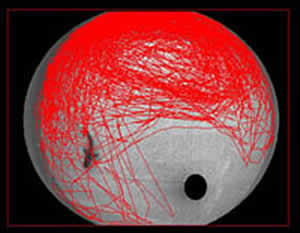 Swimming pattern of a sandbar shark in the presence of palladium neodymium suspended in the tank at the 5 o’clock position. Credit: Leonie Smith

Sharks in captivity avoid metals that react with seawater to produce an electric field, a behavior that may help fishery biologists develop a strategy to reduce the bycatch of sharks in longline gear. Shark bycatch is an increasing priority worldwide given diminished populations of many shark species, and because sharks compete with target species for baited lines, reducing fishing efficiency and increasing operating costs.

A recent study by NOAA scientists and colleagues on captive juvenile sandbar sharks showed the presence of an electropositive alloy, in this case palladium neodymium, clearly altered the swimming patterns of individual animals and temporarily deterred feeding in groups of sharks. Rare earth metals have previously been reported to deter spiny dogfish from attacking bait due to interactions with the shark’s electroreceptive system, which detects weak electric fields including those generated by their prey. Electric fields generated by electropositive alloys are believed to deter or repel sharks by overloading their sensory systems.

"Individual sandbar sharks would generally not approach the metal ingots closer than about 24 inches, nor attack pieces of cut bait suspended within approximately 12 inches,” said Richard Brill, a research scientist at NOAA’s Northeast Fisheries Science Center and head of the Cooperative Marine Education and Research (CMER) Program at the Virginia Institute of Marine Science. “This study clearly shows the alloy has the potential to repel sharks from pelagic longline fishing gear so they are not caught as bycatch, but the optimal size and shape of the alloy and other factors needs to be determined. This is a promising step.”

Up to now, electronic devices capable of repelling sharks have been large and not practical for use on longline fishing gear. The current project was undertaken to determine if small ingots of a relatively inexpensive electropositive alloy were repulsive to sharks under controlled laboratory conditions. If repulsion occurs consistently in the lab, the next step would be to conduct field trials.

Brill says juvenile sandbar sharks were used in the study because they are readily available in the estuaries along Virginia’s coast, do well in captivity, feed easily, and their constant forward motion makes it easy to measure changes in their swimming patterns. “They are good models for the species of sharks that are a significant problem in pelagic or open ocean longline fisheries worldwide.”

An estimated 11 to 13 million sharks are caught worldwide as bycatch each year, sometimes more than the targeted fish species. Sharks, part of the taxonomic group known as elasmobranchs which also includes skates and rays, generally have slow growth and reproductive rates and late sexual maturity. These factors result in an inability of shark populations to support high rates of fishing mortality, or slow population recovery. There is concern among scientists and fishery resource managers that severe reductions in elasmobranch populations could restructure marine ecosystems.

The sandbar shark, Carcharhinus plumbeus, is one of the largest coastal sharks in the world and can reach lengths of eight feet and weigh as much as 200 pounds. Sandbar sharks are usually found in shallow coastal waters including bays and estuaries in tropical and temperate waters around the world. In the western Atlantic Ocean they range from Massachusetts to Brazil, with the waters of the lower Chesapeake Bay considered a major nursery ground. Humans are their main predator.

“Our results were very promising but need further study,” Brill said. “The alloy we used, palladium neodymium, appears to be a good alternative to more expensive metals. It is also machinable and is reasonably resistant to corrosion in seawater. How long the metal will last before corroding and how long it will repel sharks in the field, however, needs to be determined.”

The lab experiments were conducted at the Virginia Institute of Marine Science using juvenile sand sharks up to five years old caught in surrounding waters and brought to an outdoor holding tank.

In addition to Brill, the study included scientists and students from Indiana University, Bangor University in Wales, Hampton University in Virginia, the University of Hawaii, and the research firm Shark Defense LLC of Oak Ridge, NJ, which develops shark repellents. Principal funding was provided by the Pacific Islands Fisheries Science Center of NOAA’s National Marine Fisheries Service in Honolulu, with logistical support from the VIMS Eastern Shore Laboratory.

This study by Brill and colleagues is among the first to rigorously test the use of rare earth materials on repelling elasmobranchs, and supports a recent study using metal alloys to repel spiny dogfish conducted by NOAA researchers in Oregon.

Results of the sandbar shark study were presented at a NOAA-sponsored shark deterrent workshop in Boston earlier this month.