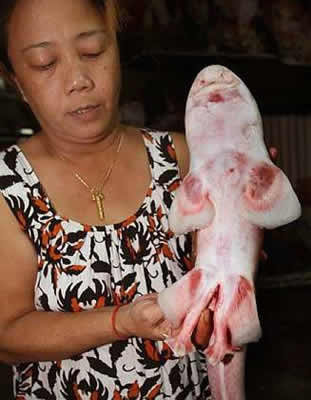 Unusual find:Looi showing the webbed feet of the baby shark. 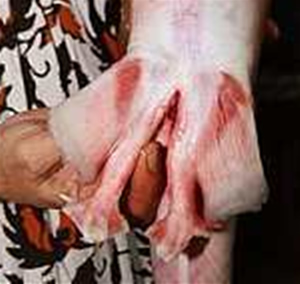 Close-up of the webbed feet

Has anyone ever seen a baby shark with webbed feet? A worker of the Malaysian Fisheries Development Board (LKIM) in Batu Maung, Penang, made this unusual find when she was given the 1.7kg fish by a fisherman at the jetty recently.

Mary Looi, 48, said she only realised the shark was different when she wanted to cook tomyam fish for lunch for her family.

"It was only when I was about to cut the shark the day after I received it that I found two webbed feet sticking out from the lower part of the body.

"The shark is one-metre long," she said.

Looi said she dared not cook the fish after consulting her husband Gooi Man Kaw, 57, who told her that according to Chinese belief, eating fish with unusual features could bring disaster or ill luck.

"Immediately, I returned the fish to the fisherman that night at about 10pm.

"He threw it back into the sea," said Looi.

Looi, who has been working at LKIM for 10 years, said this was the first time she had stumbled upon such an unusual find.

"There is a possibility that the fish could have swum from other waters into Malaysian waters.

"As far as I am concerned, fish species with legs or bony fins can only be discovered in the waters of North Sulawesi in Indonesia or South Africa," he said.