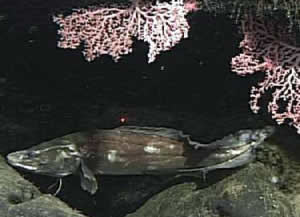 A cusk eel takes refuge in a crevice, under an umbrella of gorgonian corals.

RICHMOND, Virginia -- An international research team studying sound production in deep-sea fishes has found that cusk-eels use several sets of muscles to produce sound that plays a prominent role in male mating calls.

These findings, published online today in the Royal Society journal, Biology Letters, may help researchers gain further insight into acoustic communication in the deep sea and the role of sound in fish behavior.

“Little is known about acoustic communication in the deep sea because of the difficulties of observing fish in this habitat. Based on anatomy, ophidiid fishes, or cusk-eels, are likely one of the chief sound producers. They have unusual sonic muscles that occur in antagonistic pairs and are typically larger in males,” said Fine, a professor in the VCU Department of Biology.

In previous work outside of the mating season, they found that the tiny intermediate muscle of the fawn cusk-eel was larger in females, which was quite surprising since male fish are usually more vocal than females, said Fine.

The research team obtained the fish during the summer mating season and found that intermediate muscle weight increased four fold and had become heavier in males than in females.

“Our findings suggest that the intermediate muscle likely assumes a prominent role in sound production of male mating calls and suggest that male sex hormones cause the muscle to grow,” he said.

According to Fine, fishes make sounds for different reasons, but the two most common types of sounds are made for courtship and agonistic behaviors.