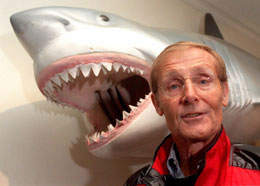 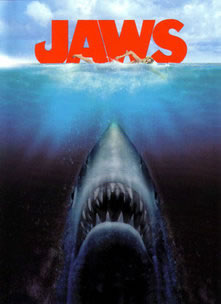 'Jaws': The book that started it all

NEW YORK, NY -- Peter Benchley, whose novel Jaws terrorized millions of swimmers even as the author himself became an advocate for the conservation of sharks, has died at age 65, his widow said Sunday. Wendy Benchley, married to the author for 41 years, said he died Saturday night at their home in Princeton, N.J. The cause of death, she said, was idiopathic pulmonary fibrosis, a progressive and a fatal scarring of the lungs.

Thanks to Benchley's 1974 novel, and Steven Spielberg's blockbuster movie of the same name, the simple act of ocean swimming became synonymous with fatal horror, of still water followed by ominous, pumping music, then teeth and blood and panic.

Benchley, the grandson of humorist Robert Benchley and son of author Nathaniel Benchley, was born in New York City in 1940. He attended the elite Philips Exeter Academy in New Hampshire, then graduated from Harvard University in 1961. He worked at The Washington Post and Newsweek and spent two years as a speechwriter for President Johnson, writing some "difficult" speeches about the Vietnam War, Wendy Benchley said.

The author's interest in sharks was lifelong, beginning with childhood visits to Nantucket Island in Massachusetts and heightening in the mid-1960s when he read about a fisherman catching a 4,550-pound great white shark off Long Island, the setting for his novel.

"I thought to myself, 'What would happen if one of those came around and wouldn't go away?'" he recalled. Benchley didn't start the novel until 1971 because he was too busy working with his day jobs.

"There was no particular influence. My idea was to tell my first novel as a sort of long story ... just to see if I could do it. I had been a freelance writer since I was 16, and I sold things to various magazines and newspapers whenever I could."

While Peter Benchley co-wrote the screenplay for Jaws, and authored several other novels, including The Deep and The Island, Wendy Benchley said he was especially proud of his conservation work. He served on the national council of Environmental Defense, hosted numerous television wildlife programs, gave speeches around the world and wrote articles for National Geographic and other publications.

"He cared very much about sharks. He spent most of his life trying to explain to people that if you are in the ocean, you're in the shark's territory, so it behooves you to take precautions," Wendy Benchley said.

The author did not abide by the mayhem his book evoked. In fact, he was quite at ease around sharks, his widow said. She recalled a trip to Guadeloupe, Mexico last year for their 40th wedding anniversary, when the two went into the water in a special cage.

"They put bait in the water and sharks swim around and play games," she said. "We were thrilled, excited. We'd been around sharks for so long."

Besides his wife, Peter Benchley is survived by three children and five grandchildren. A small family service will take place next week in Princeton, Wendy Benchley said.