Scientists Develop New Temperature Reconstruction From Indo-Pacific Warm Pool; 'this Is Only The First Word' 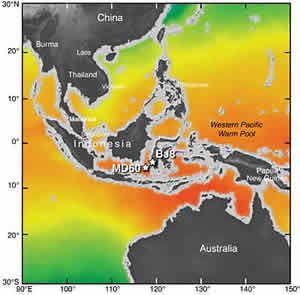 A map of the Indo-Pacific region indicates the locations of sediment cores used for the study. Credit: Jack Cook, WHOI

WOODS HOLE, Massachusetts -- A new 2,000-year-long reconstruction of sea surface temperatures (SST) from the Indo-Pacific warm pool (IPWP) suggests that temperatures in the region may have been as warm during the Medieval Warm Period as they are today.

The IPWP is the largest body of warm water in the world, and, as a result, it is the largest source of heat and moisture to the global atmosphere, and an important component of the planet's climate. Climate models suggest that global mean temperatures are particularly sensitive to sea surface temperatures in the IPWP. Understanding the past history of the region is of great importance for placing current warming trends in a global context.

The study is published in the journal Nature.

In a joint project with the Indonesian Ministry of Science and Technology (BPPT), the study's authors, Delia Oppo, a paleo–oceanographer with the Woods Hole Oceanographic Institution, and her colleagues Yair Rosenthal of Rutgers State University and Braddock K. Linsley of the University at Albany-State University of New York, collected sediment cores along the continental margin of the Indonesian Seas and used chemical analyses to estimate water past temperatures and date the sediment. The cruise included 13 US and 14 Indonesian scientists.

"This is the first record from the region that has really modern sediments and a record of the last two millennia, allowing us to place recent trends in a larger framework," notes Oppo.

Temperature reconstructions suggest that the Northern Hemisphere may have been slightly cooler (by about 0.5 degrees Celsius) during the 'Medieval Warm Period' (~AD 800-1300) than during the late-20th century. However, these temperature reconstructions are based on, in large part, data compiled from high latitude or high altitude terrestrial proxy records, such as tree rings and ice cores, from the Northern Hemisphere (NH). Little pre-historical temperature data from tropical regions like the IPWP has been incorporated into these analyses, and the global extent of warm temperatures during this interval is unclear. As a result, conclusions regarding past global temperatures still have some uncertainties.

Oppo comments, "Although there are significant uncertainties with our own reconstruction, our work raises the idea that perhaps even the Northern Hemisphere temperature reconstructions need to be looked at more closely."

Records of water temperature from instruments like thermometers are only available back to the 1850s. In order to reconstruct temperatures over the last 2,000 years, Oppo and her colleagues used a proxy for temperature collected from the skeletons of marine plankton in sediments in the Indo-Pacific Ocean. The ratio of magnesium to calcium in the hard outer shells of the planktonic foraminifera Globigerinoides ruber varies depending on the surface temperature of the water in which it grows. When the phytoplankton dies, it falls to the bottom of the ocean and accumulates in sediments, recording the sea surface temperature in which it lived.

"Marine sediments accumulate slowly in general -- approximately 3 cm/yr -- which makes it hard to overlap sediment record with instrumental record and compare that record to modern temperature records," says Oppo. "That's what is different about this study. The sediment accumulates fast enough in this region to give us enough material to sample and date to modern times."

The team generated a composite 2000-year record by combining published data from a piston core in the area with the data they collected using a gravity corer and a multi-corer. Tubes on the bottom of the multi-corer collected the most recently deposited sediment, therefore enabling the comparison of sea surface temperature information recorded in the plankton shells to direct measurements from thermometers.

Oppo cautions that the reconstruction contains some uncertainties. Information from three different cores was compiled in order to reconstruct a 2,000-year-long record. In addition sediment data have an inherent uncertainty associated with accurately dating samples. The SST variations they have reconstructed are very small, near the limit of the Mg/Ca dating method. Even in light of these issues, the results from the reconstruction are of fundamental importance to the scientific community.

The overall similarity in trend between the Northern Hemisphere and the IPWP reconstructions suggests that that Indonesian SST is well correlated to global SST and air temperature. On the other hand, the finding that IPWP SSTs seem to have been approximately the same as today in the past, at a time when average Northern Hemisphere temperature appear to have been cooler than today, suggests changes in the coupling between IPWP and Northern Hemisphere or global temperatures have occurred in the past, for reasons that are not yet understood. "This work points in the direction of questions that we have to ask," Oppo says. "This is only the first word, not the last word."