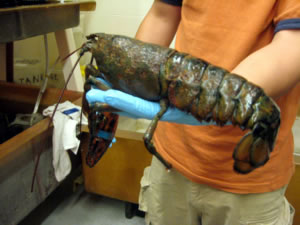 This drooping lobster is missing limbs and painted with dark spots, the tell-tale signs of shell disease. (Credit: Joseph Caputo/MBL)

Preliminary evidence from the lab of Hans Laufer suggests that certain concentrations of alkyphenols may be interfering with the ability of lobsters to develop tough shells. Instead, the shells are weakened, leaving affected lobsters susceptible to the microbial invasions characteristic of the illness.

“Lobsters ‘know’ when their shell is damaged, and that’s probably the reason when they have shell disease, why they molt more quickly,” says Laufer, a visiting investigator at the MBL for over 20 years and professor emeritus of molecular and cell biology at the University of Connecticut. “But ultimately, they still come down with the disease. And we think the presence of alkyphenols contributes to that.”

Like any crustacean, lobsters shed their shells multiple times in one lifetime. After molting, the outer skin of the soft and exposed lobster will begin to harden. It is here that Laufer thinks the alkyphenols are doing their damage. At this point, a derivative of the amino acid tyrosine, whose function is to harden the developing shell, is incorporated. It is known that alkyphenols and tyrosine are similarly shaped and Laufer suspects that the toxin may be blocking tyrosine from its normal functions. He is at MBL this summer to measure the amount of competition between the two molecules. Alkyphenols are also known to act as endocrine disruptors.

Laufer discovered the presence of alkyphenols in lobsters serendipitously while investigating a tremendous lobster die off at Long Island Sound in 1999, when shell disease, first observed in the mid-1990s, was noted to be on the rise. Although an unusually hot summer, it was also the first time New York City sprayed mosquito populations to prevent the spread of West Nile virus. Laufer, who began his career as an insect endocrinologist, suspected the toxins from the sprayings may have contributed to the lobster die off. In 2001, while searching for the mosquito toxins in lobsters, he instead found alkyphenols.

“It’s a real problem,” Laufer says. “Plastics last a long time, but breakdown products last even longer. Perhaps shell disease is only the tip of the iceberg of a more basic problem of endocrine disrupting chemicals in marine environments.”