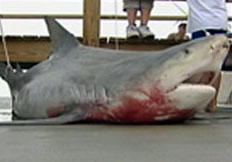 ST. PETERSBURG, Florida -- Last Summer, Frank Maloney and his friends got hooked on fishing off his dock. They never thought they would catch something this big.

"We knew when we hooked it this was the biggest thing we've ever caught," said Frank Maloney.

Maloney called for help and his friends knew this was not just a normal catch.

The three men spent hours battling the shark in 20-minute shifts until it was lured into the sea well and they were able to sink a treble hook into its flesh and lash it in place for the night. Frank Maloney said they had to put ice on the reel to keep it from overheating during the lengthy encounter.

He said local fish markets were not interested in the animal so he plans to mount the bull shark's jaws and return the rest of the carcass to sea.