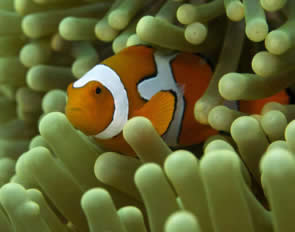 Researchers will use harmless a chemical tag that becomes a signature within the ear bones of fish. (Photo by Simon Thorrold, Woods Hole) 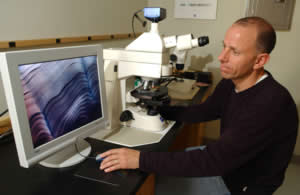 Fish ecologist Simon Thorrold will test the efficacy of Marine Protected Areas through a novel technique for tagging fish. (Photo by Tom Kleindinst)

-- Marine Protected Areas (MPAs) are often hailed as a way to halt serious declines in the abundance of marine species that have been over-fished. But even as nations begin to set aside protected parcels of ocean for marine reserves, the effectiveness of the approach as a fisheries management tool remains unclear.

Simon Thorrold, a fish ecologist from the Woods Hole Oceanographic Institution (WHOI), would like to put MPAs to the test with a novel technique for tagging fish.

Through a new research grant from the David and Lucile Packard Foundation, Thorrold and colleagues plan to use harmless chemical tags to track the dispersal of the larvae of coral reef fishes in the western Pacific Ocean. The Packard Foundation’s Conservation and Science Program has granted Thorrold and colleagues more than $480,000 for three years to study the population dynamics of grouper and snapper in the waters around the Great Barrier Reef and Papua New Guinea.

Through a new technique known as TRAnsgenerational Isotope Labeling (TRAIL), the researchers will introduce an artificial tag—a stable isotope of barium—into the tissues of mature female fish just before spawning. That chemical tag is then passed to the female’s offspring and becomes a chemical signature within the ear bones (otoliths) of the next generation of fish.

Researchers can then track the dispersal of the tagged larvae across reefs and large stretches of open ocean. This chemical tagging approach has been successfully tested in limited studies with clownfish and butterflyfish.

Now, Thorrold and colleagues want to attempt one of the first large-scale, empirical tests of the effectiveness of marine protected areas. The scientists will attempt to assess how far and how effectively the larvae spawned within protected areas are contributing to populations outside of their human-described borders.

Most management and conservation strategies assume that fish populations may be connected across broad areas, and that protecting them in one location will allow for sustainable fisheries outside of the reserve boundaries. But such theories are mostly untested and do not necessarily account for how long and how far larvae may or may not drift in the open ocean.

The new research program will be led by Thorrold, an associate scientist in the WHOI Department of Biology. Co-investigators include Glenn Almany, Geoffrey Jones, and Garry Russ of the ARC Centre of Excellence for Coral Reef Studies and James Cook University (Australia), and Rick Hamilton of The Nature Conservancy.