Research: Smaller Fishes Had A Better Chance Of Avoiding Extinction; 'The Same Thing Is Happening Today' 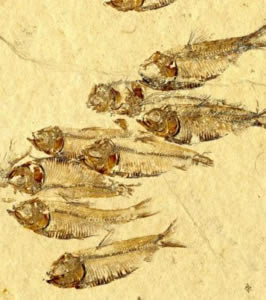 Herrings are one of the small-bodied groups of bony fishes that survived the end-Cretaceous extinction. Photo by Matt Friedman

CHICAGO, Illinois -- Large size and a fast bite spelled doom for bony fishes during the last mass extinction 65 million years ago, according to a new study to be published March 31, 2009, in the Proceedings of the National Academy of Sciences.

Today, those same features characterize large predatory bony fishes, such as tuna and billfishes, that are currently in decline and at risk of extinction themselves, said Matt Friedman, author of the study and a graduate student in evolutionary biology at the University of Chicago.

"The same thing is happening today to ecologically similar fishes," he said. "The hardest hit species are consistently big predators."

Studies of modern fishes demonstrate that large body size is linked to large prey size and low rates of population growth, while fast-closing jaws appear to be adaptations for capturing agile, evasive prey—in other words, other fishes. The fossil record provides some remarkable evidence supporting these estimates of function: fossil fishes with preserved stomach contents that record their last meals.

When an asteroid struck the earth at the end of the Cretaceous about 65 million years ago, the resultant impact clouded the earth in soot and smoke. This blocked photosynthesis on land and in the sea, undermined food chains at a rudimentary level, and led to the extinction of thousands of species of flora and fauna, including dinosaurs.

Scientists had speculated that during that interval large predatory fishes might have been more likely than other fishes to go extinct because they tended to have slowly increasing populations, live more spread out, take longer to mature, and occupy precarious positions at the tops of food chains. Today, ecologically similar fishes appear to be the least able to rebound from declining numbers due to overfishing.

To build the database he needed to test this prediction, Friedman traveled around the world measuring the body size and jaw bones of 249 genera of fossil fishes that lived during the late Cretaceous. These kinds of direct measurements are possible in fossil fishes because many are represented by complete, articulated individuals. This is unlike the fossil record of most other vertebrates, where bones, teeth and other parts of the skeleton are often scattered and found in isolation.

This study is the first to test this theory with hard data and to quantify the relationship between body size, jaw function and vulnerability of fishes during the Cretaceous extinction, according to Friedman.

"Anyway you sliced it, the data showed that if you were a big fish with a fast bite you were toast," he said.

Ironically, today's large fishes with fast bites evolved relatively shortly after the end-Cretaceous extinction, apparently filling the functional and ecological roles vacated by the victims of that mass extinction. Although the two groups of fishes are not related to each other, their fates may end up being similar.

The paper is called "Ecomorphological selectivity among marine teleost fishes during the end-Cretaceous extinction" and will appear in issue 13 of PNAS. In it, Friedman describes the results of his study as robust because the large-bodied, predatory fishes that are disproportionately devastated also have the best fossil records. "In other words, we can be convinced that these forms really do die off here, and that their disappearance can't be chalked up to a lousy fossil record," Friedman noted.

Nevertheless, fossil fishes are not well studied because paleontologists, as a group, tend to be drawn to other animals, such as dinosaurs. Therefore, many large-scale patterns of fish evolution remain unclear.

The fossil fishes included in the study are diverse in form, and range in length from about 20 feet to less than one inch.

"This study demonstrates that fossil datasets are germane to modern diversity and evolution by allowing us to calibrate what characteristics might relate to extinction vulnerability today," Friedman said. "Echoes of the end-Cretaceous extinction reverberate 65 million years later."