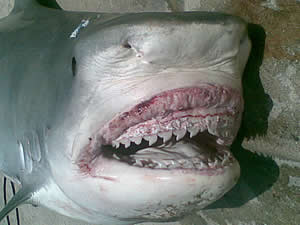 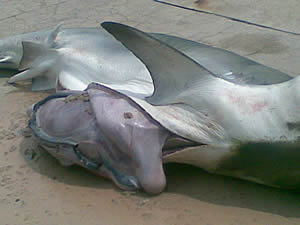 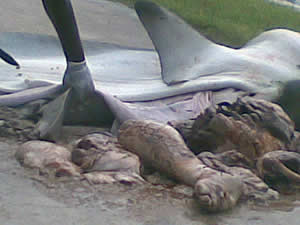 NASSAU, The Bahamas -- Bahamian authorities are still trying to identify the remains of a dead man found inside of a tiger shark caught off the island's coast last weekend.

Investigators are examining pictures of the deceased to gather whether or not the man was alive or dead at the time he was eaten by the shark.

Leon Bethel, head of the Bahamas Central Detective Unit, examined the photos and could not determine if the victim suffered any defensive wounds. Mr. Bethel added they were waiting for a pathologist to examine the remains. The shark's digestive tract will also be examined to determine how long the man was in the shark's belly.

The fisherman who caught the shark in Bahamian waters said a left leg popped out of the shark's mouth when they hauled it on their vessel. When the shark was brought ashore and examined more closely, local officers found the man's right leg, two severed arms and a torso in two pieces.

The victim, still unidentified, is described as a "black man, of a heavy build and structure."

The victim had "neither clothes nor any identifying marks," said Bahamian investment banker Humphrey Simmons, one of the deep sea fishermen who hauled the gruesome catch on board his boat.

Police are also investigating the possibility the man may be one of three men who have gone missing at sea after boat trouble in the past two weeks.