Researchers Give New Hybrid Vehicle Its First Test-Drive In The Ocean; 'A Virtually Unlimited Energy Source' 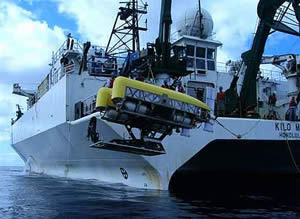 The newly developed hybrid ROV Nereus is launched from the RV Kilo Moana during a test cruise in 2007. credit Matt Heintz, WHOI 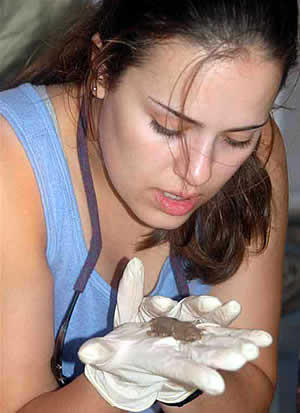 WOODS HOLE, Massachusetts -- A new type of deep-sea robotic vehicle called Nereus has successfully reached the deepest part of the world’s ocean, reports a team of U.S. engineers and scientists aboard the research vessel Kilo Moana. The dive to 10,902 meters (6.8 miles) occurred on May 31, 2009, at the Challenger Deep in the Mariana Trench in the western Pacific Ocean.

The dive makes Nereus the world’s deepest-diving vehicle and the first vehicle to explore the Mariana Trench since 1998.

Nereus’s unique hybrid-vehicle design makes it ideally suited to explore the ocean’s last frontiers. The unmanned vehicle is remotely operated by pilots aboard a surface ship via a lightweight, micro-thin, fiber-optic tether that allows Nereus to dive deep and be highly maneuverable. Nereus can also be switched into a free-swimming, autonomous vehicle.

“The Mariana Trench is the deepest known part of the ocean. Reaching such extreme depths represents the pinnacle of technical challenges and the team is very pleased Nereus has been successful in reaching the very bottom to return imagery and samples from such a hostile world. With a robot like Nereus we can now explore virtually anywhere in the ocean,” said Andy Bowen, the project manager and principal developer of Nereus at the Woods Hole Oceanographic Institution (WHOI). “The trenches are virtually unexplored, and I am absolutely certain Nereus will enable new discoveries. I believe it marks the start of a new era in ocean exploration.”

“Much of the ocean’s depth remains unexplored. Ocean scientists now have a unique tool to gather images, data, and samples from everywhere in the oceans, rather than those parts shallower than 6500 meters (4 miles),” said Julie Morris, director of the National Science Foundation (NSF) Ocean Sciences Division, the principal sponsor of the $8 million project. “With its innovative technology, Nereus allows us to study and understand the ocean’s deepest regions, previously inaccessible. We’re very pleased with the success of these sea trials.”

Aside from NSF, funds for Nereus have been provided by the Office of Naval Research, the National Oceanic and Atmospheric Administration, the Russell Family Foundation, and WHOI.

The Mariana Trench forms the boundary between two tectonic plates, where the Pacific Plate is subducted beneath the small Mariana Plate. It is part of the Pacific Ring of Fire, a 40,000-kilometer (25,000-mile) area where most of the world’s volcanic eruptions and earthquakes occur. At 11,000 meters, its depth is approximately the same as the cruising altitude of a commercial airliner.

To reach the trench, Nereus dove nearly twice as deep as research submarines are capable of and had to withstand pressures 1,000 times that at Earth’s surface—crushing forces similar to those on the surface of Venus. Only two other vehicles have succeeded in reaching the trench: the U.S. Navy-built bathyscaphe Trieste, which carried Jacques Piccard and Don Walsh there in 1960, and the Japanese-built robot Kaiko, which made three unmanned expeditions to the trench between 1995 and 1998. Neither of these is presently available to the scientific community. Trieste was retired in 1966, and Kaiko was lost at sea in 2003.

The Nereus engineering team knew that, to reach these depths, a tethered robot using traditional technologies would be prohibitively expensive to build and operate. So they used unique technologies and innovative methods to strike a balance between size, weight, materials cost, and functionality.

Building on previous experience developing tethered robots and autonomous underwater vehicles (AUVs) at WHOI and elsewhere, the team fused the two approaches together to develop a hybrid vehicle that could fly like an aircraft to survey and map broad areas and then be converted at sea into a tethered, remotely operated vehicle (ROV) that can hover like a helicopter near the seafloor to conduct experiments or to collect biological or rock samples under real-time human control. The present trials of Nereus are being conducted in this tethered, ROV mode of operation.

The tethering system presented one of the greatest challenges in developing a cost-effective ROV capable of reaching these depths. Traditional robotic systems use a steel-reinforced cables containing copper wires to power the vehicle and optical fibers to enable information to be passed between the ship and the vehicle. If such a cable were used to reach the seafloor in the Mariana Trench, it would snap under its own weight.

To solve this challenge, the Nereus team adapted fiber-optic technology developed by the Navy’s Space and Naval Warfare Systems Center Pacific (SSC Pacific) to carry real-time video and other data between the Nereus and the surface crew. Similar in diameter to a human hair and with a breaking strength of only 4 kilograms (8.8 pounds), the tether is composed of glass fiber core with a very thin protective jacket of plastic. Nereus brings approximately 40 kilometers (25 miles) of cable in two canisters the size of large coffee cans that spool out the fiber as needed. By using this very slender tether instead of a large cable, the team was able to decrease the size, weight, complexity, and cost of the vehicle.

Another weight-saving advance of the vehicle is its use of ceramic spheres for flotation, rather than the much heavier traditional syntactic foam used on vehicles like the submersible Alvin or the ROV Jason. Each of Nereus’s two hulls contains approximately 800 of the ~9-centimeter (3.5-inch) hollow spheres precisely designed and fabricated to withstand crushing pressures.

With its tandem hull design, Nereus weighs nearly 3 tons in air and is about 4.25 meters (14 feet) long and approximately 2.3 meters (nearly 8 feet) wide. It is powered by more than 4,000 lithium-ion batteries. They are similar to those used in laptop computers and cell phones, but have been carefully tested to be used safely and reliably under the intense pressure of the depths.

The expedition left Guam aboard RV Kilo Moana, operated by the University of Hawaii, on May 24 to begin a two-week engineering test cruise. On May 25, the team, which includes co-principal investigators Louis Whitcomb, a professor of mechanical engineering at The Johns Hopkins University, and Dana Yoerger of WHOI who were responsible for development of the vehicle’s navigation and control system, conducted a planned sequence of successively deeper dives—testing Nereus, making scientific observations and collecting deep-sea samples at each depth they reached. Testing will continue over the next few days, and the team will return to port on June 5.

“We hope that Nereus will help scientists investigate some of the ‘big questions’ of our time – questions of vital societal importance such the relation between seafloor dynamics and global climate change,” said Whitcomb.

Co-chief scientists of the expedition, Tim Shank, a WHOI biologist, and Patty Fryer, a geologist with the University of Hawaii, are on board to examine the samples retrieved by the vehicle during each dive in its ROV mode.

On its dive to the Challenger Deep, Nereus spent over 10 hours on the bottom, sending live video back to the ship through its fiber-optic tether and collecting geological and biological samples with its manipulator arm, and placed a marker on the seafloor signed by those onboard the surface ship. “The samples collected by the vehicle include sediment from the subducting and overriding tectonic plates that meet at the trench and, for the first time, rocks from deep exposures of the Earth’s crust close to mantle depths south of the Challenger Deep,” said Fryer. “We will know the full story once the shore-based analyses are completed back the laboratory this summer and integrate them with the new mapping data to tell a story of plate collision in greater detail than ever before accomplished in the worlds oceans.”

“These and future discoveries by Nereus will be the result of its versatility and agility – it’s like no other deep submergence vehicle,” said Shank. “It allows vast areas to be explored with great effectiveness. Our true achievement is not just getting to the deepest point in our ocean, but unleashing a capability that now enables deep exploration, unencumbered by a heavy tether and surface ship, to scientifically investigate some of the most dynamically-rich geological and biological systems on Earth.”

The design and construction of Nereus has been documented since 2006 by the Science Channel. Their cameras were aboard the Kilo Moana for this historic expedition to the deepest waters on Earth, chronicling the team’s tests and findings for American audiences. A one-hour documentary produced by Discovery Studios will air on Science Channel and Science Channel HD early this fall.

“We couldn’t be prouder of the stunning accomplishments of this dedicated and talented team,” said Susan Avery, president and director of WHOI. “With this engineering trial successfully behind us, we’re eager for Nereus to become widely used to explore the most inaccessible reaches of the ocean. With no part of the deep seafloor beyond our reach, it’s exciting to think of the discoveries that await.”