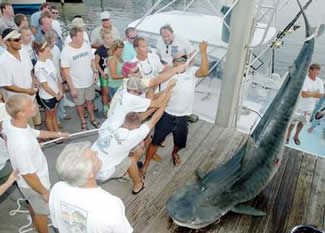 A 765-pound male tiger shark is lifted to be weighed on the Destin Harbor docks. AP

Fishermen know how to lure a crowd to the docks in this Floria Gulf Coast city during a lull in tourism: bring in big sharks and hang them up.

Locals revived the once-popular Destin Deep Water Shark Tournament this week, and on its first day, it drew several hundred onlookers who scrambled to have their pictures taken with a 656-pound, 11-foot tiger shark strung up by its tail. Many gasped and applauded at the sight.

But the tournament also attracted the same type of protests that helped cause its 10-year absence in the Panhandle. Several demonstrators carried signs outside the event and a plane circled overhead Thursday with a sign from the Humane Society of the United States: "End The Cruel Shark Tournament Now."

"This is a slaughter. Sharks have a bad reputation because we are afraid they might bite a human. What does this tell our children about biodiversity?" said protester Gail Powell.

Locals do not see it that way. They are counting on the four-day event to fill hotels and restaurants, with the summer-tourist season over and the arrival of retired snowbirds from the North and Midwest months away.

Sharks do not glide in the air like the blue marlin -- the ultimate sport fish in these waters -- and they are not coveted for their taste like red snapper and grouper.

"But you can have the prettiest rack of snappers and groupers and if there's a shark up there, that's what everyone wants to come and see," said deckhand Ken Blackmon.

Destin held the tournament for 20 years before ending it in 1995 because of protests and smaller catches, said Bruce Cheves, the tournament's weigh master.

But now, they say it is appropriate to have the event in the town that calls itself "The World's Luckiest Fishing Village." They say restrictions on commercial net fishing have caused the shark population to flourish by providing more food for the large predators.

"We aren't going out there to kill out all the sharks, but you see some big monsters all the time," said tournament organizer Jim Roberson.

Biologists disagree with the fishermen about the number of sharks in local waters. George Burgess, director of the University of Florida's Program for Shark Research, and his researchers examined the sharks caught at the tournament.

Burgess planned to dissect the animals and use the information to study shark populations in the region.

"In the '70s and the '80s there was a collective testosterone rush because of the movie Jaws and sport fishing for sharks accelerated. Then sharks began to be commercially caught for their fins," he said.

Burgess said he favors events such as an upcoming shark tournament in Naples where the fish will be caught and released.

Florida Fish and Wildlife Conservation Commission officials are also concerned. State regulations limit each fisherman to one shark per day.

"Shark species are heavily overfished worldwide," said commission spokesman Lee Schlesinger, who said he was concerned about a resurgence of the tournaments.

"Historically, the shark population is one-tenth of what it used to be. They have been quite overfished. They are the top of the food chain and they are very important to the overall marine ecosystem," he said.

Forty boats with about 160 fishermen registered to participate in the Destin tournament. Fishermen must catch sharks that weigh at least 150 pounds to compete for prizes of up to $5,000.