Imported Aquacultured Reef Clams Found To Have Foreign Disease; 'It's Indigenous; You Can't Avoid It' 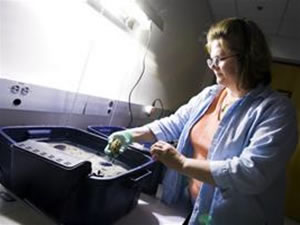 In findings that may impact the reef clam industry as well as international trade, a University of Florida veterinary pathologist recently discovered Perkinsus olseni, an internationally reportable foreign pathogen, in aquacultured clams imported from Vietnam.

While not believed to be a threat to human health or other reef aquarium species, the pathogenâs presence concerns scientists as well as aquaculture industry representatives and points out the largely unregulated environment in which the importation of aquacultured reef clams from Asia occurs.

âI had 30 clams in my lab as part of a student research project,â said Barbara Sheppard, a clinical associate professor of pathology at the UF College of Veterinary Medicine. âThen they started looking sickly, and within four months, all of them were dead.â

As a pathologist, Sheppard was intrigued. She began investigating the cause of death by freezing tissues, putting them into formalin and conducting histopathology and DNA tests in her laboratory. Her findings, which will appear in an upcoming issue of Diseases of Aquatic Organisms, showed the presence of Perkinsus olseni along with a new species of Perkinsus that has yet to be characterized.

âThis is an important finding,â said Ralph Elston, president of AquaTechnics, a Carlsborg, Wash.-based company that provides veterinary, laboratory and environmental assessment services to the shellfish industry. âIt indicates the potential risk of the spread of animal disease when health monitoring is not in place to control such risks.â

Elston added that further research is needed to evaluate the distribution of previously unknown species of Perkinsus in Florida.

Giant clams are the largest bivalves in the world. Their range stretches across the Indo-Pacific region from the eastern coast of Africa in the west to the South Pacific in the east, according to the United Nations Environment Programâs World Conservation Monitoring Center. These clams represent an increasingly large proportion of the live invertebrates imported to become aquarium specimens. As a result of overexploitation, all species of giant clams are included in the Convention on International Trade in Endangered Species of Wild Fauna and Flora, an international agreement between governments that aims to ensure that international trade in specimens of wild animals and plants does not threaten their survival.

Based on CITES data from 1993-2001, Vietnam has dominated the export of live giant clams since 1998. The United States and Europe are the main importers, and captive bred, or aquacultured, clams represent only about a third of the nearly 1 million tridacnids traded worldwide.

Sheppard is now collaborating with the Virginia Institute of Marine Sciences, the Maryland Department of Agriculture and Anita Wright, a Perkinsus researcher and associate professor at UF, to further characterize the new exotic species of Perkinsus that Sheppard discovered in her clam colony.

âThis is not a zoonotic disease, transmissible to people,â Sheppard said. âNo one is going to get sick from this, as far as we know. The problem here is economic and international trade. We know that Perkinsus is a pathogen of aquatic shellfish, and the reason it is so important is that it makes animals very vulnerable to dying when the weather gets hot or when they get stressed in some other way.â

She added that a major pathogen known as Perkinsus marinus is already associated with the depletion of major oyster stocks on the Atlantic coast.

âItâs indigenous; you canât avoid it, and we know that particular pathogen is already economically devastating to our shellfish industries,â Sheppard said. âThey donât want this Pacific version of Perkinsus (olseni) to be transported here.â

âThis is a great example of why you should never release an aquarium animal anywhere, under any circumstances,â said Ruth Francis-Floyd, director of UFâs Aquatic Animal Health Program. Aquarium owners with questions about their animalsâ health could contact the American Veterinary Medical Association for a referral to an aquatic veterinarian in their area.

âThere are probably 3,000 species involved, and no one species has the value to justify the cost of a quarantine facility big enough to handle everything,â Watson said.

Members of the clam aquaculture industry as well as the oyster industry are aware of the recent Perkinsus olseni findings and are trying to respond, he added.

Watson said he is working with Florida aquaculture representatives who âreally want to do the right thingâ and added that his laboratory has proposed a voluntary protocol involving testing and quarantine procedures.

âThe cost of doing this, however, is significant,â he said. âThe ultimate goal would be to start a Perkinsus-free aquaculture industry in the United States where baby clams that have never been exposed to the disease are produced.â