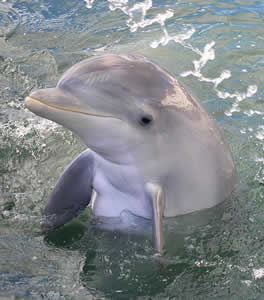 Researchers believe they can tell a dolphin's health by analyzing their breath.

DAVIS, California -- More than just "fish breath": Engineers at the University of California, Davis, have developed a new device for collecting dolphin breath for analysis, which could make it easier to check the marine animals' health and be used in studying dolphin biology and medicine as well as in wildlife conservation. The work was published recently in the journal Analytical Chemistry.

Professor Cristina Davis and colleagues at the UC Davis Department of Mechanical and Aerospace Engineering worked with researchers at the National Marine Mammal Foundation in San Diego and the Chicago Zoological Society's Mote Marine Laboratory in Sarasota, Florida, to develop the device and test it on both wild bottlenose dolphins and a population under human care.

Invasive techniques such as skin biopsies and blood sampling are difficult to perform on wild, free-ranging dolphins. Davis' team has worked on techniques for analyzing exhaled human breath, which contains compounds called metabolites that can hint at a person's diet, activity level, environmental exposures or disease state. The researchers wanted to develop a way to capture dolphin breath so they could gather this kind of information on marine mammals.

Dolphins are "explosive breathers" that can exchange up to 90 percent of their lung capacity in less than a second. That means that collecting one exhalation can give a comprehensive picture of the animal's physiology.

The researchers designed an insulated tube that traps breath exhaled from a dolphin's blowhole and freezes it. They analyzed samples to create profiles of the mix of metabolites in breath, established baseline profiles of healthy animals and were able to identify changes in the breath of animals affected by disease or other factors. The researchers concluded that breath analysis could be used to diagnose and monitor problems in marine mammals -- and, by extension, in ocean health as well.