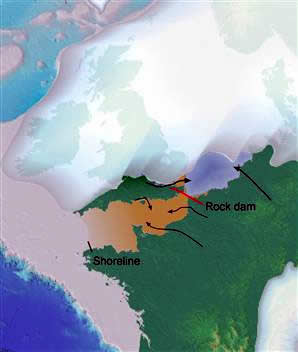 LONDON, England -- A catastrophic megaflood separated Britain from France hundreds of thousands of years ago, changing the course of British history, according to research published in the journal Nature today.

The study, led by Sanjeev Gupta and Jenny Collier from Imperial College London, has revealed spectacular images of a huge valley tens of kilometres wide and up to 50 metres deep carved into chalk bedrock on the floor of the English Channel.

Using high-resolution sonar waves the team captured images of a perfectly preserved submerged world in the channel basin. The maps highlight deep scour marks and landforms which were created by torrents of water rushing over the exposed channel basin.

To the north of the channel basin was a lake which formed in the area now known as the southern North Sea. It was fed by the Rhine and Thames, impounded to the north by glaciers and dammed to the south by the Weald-Artois chalk ridge which spanned the Dover Straits.

It is believed that a rise in the lake level eventually led to a breach in the Weald-Artois ridge, carving a massive valley along the English Channel, which was exposed during a glacial period.

At its peak, it is believed that the megaflood could have lasted several months, discharging an estimated one million cubic metres of water per second. This flow was one of the largest recorded megafloods in history and could have occurred 450,000 to 200,000 years ago.

The researchers believe the breach of the ridge, and subsequent flooding, reorganised the river drainages in north-west Europe by re-routing the combined Rhine-Thames River through the English Channel to form the Channel River.

The breach and permanent separation of the UK also affected patterns of early human occupation in Britain. Researchers speculate that the flooding induced changes in topography creating barriers to migration which led to a complete absence of humans in Britain 100,000 years ago.

Dr Sanjeev Gupta, from the Department of Earth Science & Engineering at Imperial said: “This prehistoric event rewrites the history of how the UK became an island and may explain why early human occupation of Britain came to an abrupt halt for almost 120 thousand years.”

Project collaborator, Dr Jenny Collier, also from the Department of Earth Science & Engineering, speculates on the potential for future discoveries on the continental shelves.

“The preservation of the landscape on the floor of the English Channel, which is now 30-50 m below sea-level, is far better than anyone would have expected. It opens the way to discover a host of processes that shaped the development of north-west Europe during the past million years or so,” said Dr Collier.