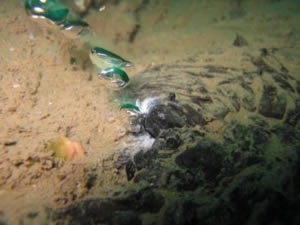 SANTA BARBARA, California -- Methane, a potent greenhouse gas, is emitted in great quantities as bubbles from seeps on the ocean floor near Santa Barbara. About half of these bubbles dissolve into the ocean, but the fate of this dissolved methane remains uncertain. Researchers at the University of California, Santa Barbara have discovered that only one percent of this dissolved methane escapes into the air -- good news for the Earth's atmosphere.

Coal Oil Point (COP), one of the world's largest and best studied seep regions, is located along the northern margin of the Santa Barbara Channel. Thousands of seep fields exist in the ocean bottom around the world, according to David Valentine, associate professor of Earth Science at UC Santa Barbara. Valentine along with other members of UCSB's seeps group studied the plume of methane bubbles that flows from the seeps at COP.

Their results will soon be published as the cover story in Volume 34 of Geophysical Research Letters. This research effort is the first time that the gas that dissolves and moves away from COP, the plume, has been studied.

The amount of methane release from COP seeps is around two million cubic feet per day, according to Valentine. About 100 barrels of oil oozes out of this area as well. Methane warms the Earth 23 times more than carbon dioxide when averaged over a century. Thus the fate of the methane bubbles from the seeps is an important environmental question.

"We found that the ocean has an amazing capacity to take up methane that is released into it -- even when it is released into shallow water," said Valentine. "Huge amounts of gas are coming up here, creating a giant gas plume. Until now, no one had measured the gas that dissolves and moves away, the plume."

Valentine hypothesized that the methane is oxidized by microbial activity in the ocean, thus relieving the ocean of the methane "burden."

To arrive at this hypothesis, Valentine and lead author Susan Mau, a postdoctoral fellow in Valentine's lab, tracked the plume down current from the seeps at 79 surface stations in a 280 square kilometer study area. They found that the methane plume spread over 70 square kilometers.

By boat, the authors sampled the water on a monthly basis. They found variable methane concentrations that corresponded with changes in surface currents. They also found that more wind releases more methane into the atmosphere. Overall, they discovered that about one percent of the dissolved methane escapes into the atmosphere in the area they studied, a long-term average. This lead the authors to hypothesize that most of the methane is transported below the ocean's surface -- away from the seep area. Then it is oxidized by microbial activity.

To back up their findings of their surface sampling of the water, the scientists used a mass spectrometer hauled behind the boat as well. This equipment allowed for very high-resolution chemical information about the methane. This effort showed no significant difference in the numbers.

"We showed that the currents control the fate of the gas and supply it to bacteria in a way that allows them to destroy the methane," said Valentine.

Valentine said that while the seeps at COP are among the largest in the world, they can be found just about anywhere.