The Pool Is Open: Divers Descend On The Vandenberg; 'It's The World's Best Wreck Dive' 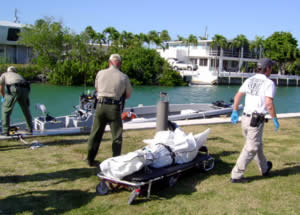 One of the bodies being brought to shore by the Florida Fish and Wildlife Conservation Commission. Photo courtesy Officer Robert Dube. 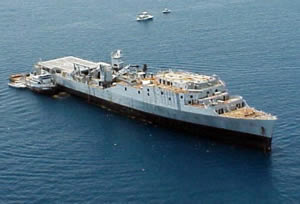 The Spiegel Grove shortly before sinking

The survivor of the quartet who went diving together Friday morning, Howard Spialter, was initially thought to have been stationed outside the entrance to the wreck. Detective Mark Coleman says, after speaking with Spialter, he actually entered the wreck with the other divers. Spialter said they weren't sure where they were inside, but he thought he knew the right direction. As he ran low on air in his dive tanks, he tried to tell the others which way to go.They wouldn't listen.

"He went one way and they went the other," said Detective Mark Coleman. "He lived because he went the right way and got out." Spialter told the detective he grabbed the hand of one of the others, in an attempt to get him to follow. That is the last he saw of his friends.

Two other divers, from another dive boat, found Kevin Coughlin and pulled him out, but it was too late.

"At some point, Coughlin also started in the right direction to get out, but he didn't make it. We don't know what happened with him," said Detective Coleman. "Either he ran out of air before he got out, or he may have embolized in a section of the wreck where there is a long, steep ascent on the way out. We just don't know. Maybe the autopsy will be able to answer some of those questions, but we may never know the whole story."

And, detectives say, they still have much investigating to do. There are more people to talk to, equipment to examine, autopsy results to look at, all of which will be accomplished in coming weeks. An investigation such as this one cannot be concluded in a day or even two. It takes time, and information is always in flux.

"Sometimes, in the confusion of the initial stages of a case like this, information is released that may not turn out to be exactly what happened. In high profile cases, the media demands information quickly and continuously. We try to comply with their demands, even though we would prefer to wait and make sure all the t's are crossed and the i's dotted," said Deputy Becky Herrin, Public Information Officer for the Monroe County Sheriff's Office.