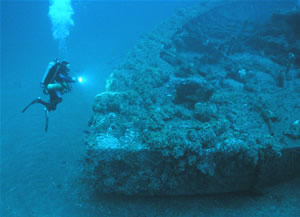 WASHINGTON, D.C. -- he natural resources of the Monitor National Marine Sanctuary off the North Carolina coast are in good condition overall, but the wreck of the Civil War ironclad encompassed by the site is at risk from human activity and natural deterioration, according to a new NOAA report.

The first-of-its-kind assessment of the sanctuary’s archaeological and living marine resources indicates that corrosion, strong currents, hurricanes, high water temperatures and highly salty water threaten the long-term stability of the Monitor wreck. Discarded fishing gear, which can become entangled on the wreck, and other forms of marine debris also pose a danger to the historic site.

Although not a major problem currently, looting of the wreck, vessel anchoring, bottom trawling and other activities prohibited in sanctuary waters are of concern due to significant diving, boating and fishing activity in the area.

“While major portions of the Monitor have been recovered and are now being conserved and displayed at the USS Monitor Center, we still have more to learn from this historically important ship,” said David Alberg, superintendent of the Monitor sanctuary. “The Monitor and the sanctuary’s other resources deserve no less than continued study, protection and respect.”

The report finds that marine life within the sanctuary, including black seabass, oyster toadfish and great barracuda, is abundant. The Monitor has also become a productive artificial reef colonized by a variety of corals and sponges. Water quality in the sanctuary is generally good, with no evidence of any risks to human health.

Prepared by NOAA's Office of National Marine Sanctuaries, the peer-reviewed report provides a baseline for monitoring changes to sanctuary resources and identifying research and management priorities. The full report is available online.

The wreck of the USS Monitor was designated the first national marine sanctuary in 1975. Located 16 miles off Cape Hatteras, N.C., the sanctuary includes a column of water one nautical mile in diameter that extends from the ocean’s surface down 240 feet to the seabed around the wreck.

NOAA and the U.S. Navy recovered major portions of the Monitor, including its propeller, steam engine and revolving gun turret, between 1998 and 2002. The Mariners' Museum in Newport News, Va., is the primary repository of Monitor artifacts and documents. NOAA monitors the sanctuary through regular site visits and a NOAA buoy that collects real-time water temperature, current and wind speed data.