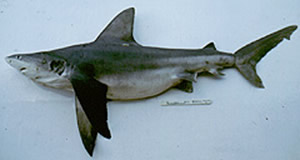 WASHINGTON, D.C. -- NOAA Fisheries Service is proposing that commercial and recreational fishing for sandbar sharks be significantly reduced and limited to only those commercial vessels that take part in a shark research program. This proposal is open to public comment.

“Because sandbar sharks as well as dusky sharks have been severely depleted, we must take strong measures to stop overfishing and allow these species to rebuild,” said Dr. William T. Hogarth, director of NOAA Fisheries Service. “Even with these measures, it will take a long time to rebuild the population of these sharks because of their unique biology.”

There are approximately 529 commercial fishing permits for shark fishing in the Atlantic Ocean, Gulf of Mexico and Caribbean. Sandbar sharks, because of their large fins, are the most valuable species among the large coastal sharks. The fins are considered a delicacy and are a main ingredient in ethnic food dishes such as shark fin soup.

The proposed amendment to the Consolidated Highly Migratory Species Fishery Management Plan would reduce the quota for sandbar sharks by 80 percent as part of the rebuilding plan. The measures would help NOAA Fisheries meet the Congressional mandate of the newly reauthorized Magnuson-Stevens Fishery Conservation and Management Act to end all overfishing.

NOAA Fisheries would also establish a shark research fishery of between five and 10 vessels that could land sandbar and other sharks. The vessels would have observers on board and meet other criteria to be part of the program. The research would be designed to gain more information about the status, mobility, migration, habitat, ecology, and age and growth characteristics of sandbar sharks.

Other measures in the proposed amendment are the closing of some areas to shark fishing as recommended by the South Atlantic Fishery Management Council; establishing a limit per trip on the amount of other large coastal sharks a fishermen can keep; requiring that fins be attached to any shark that is commercially landed; and reducing the shark species that recreational fishermen can keep.

During the months of August and September, NOAA Fisheries Service will hold several hearings along the Atlantic Coast and Gulf of Mexico to gather public comments on the proposed amendment.