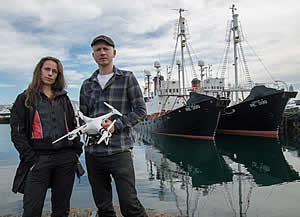 REYKJAVIK, Iceland -- Activists from the marine conservation group Hard To Port have launched an educational anti-whaling campaign to monitor and expose the country's whaling activities.

As the first fin whale of the season was pulled towards the whaling station for further processing, an activist of the group climbed on top of the carcass. In order to draw attention to the cruel practice and continued violation of international agreements he set off smoke signals and held up a banner saying '#whalerwatching' â the groups motto of the campaign.

"The protagonists of Iceland's whaling industry care a great deal about maintaining a low public profile. They know what they are hiding and they know that if people find out, the public outcry will be immense. What happens to Icelandic marine wildlife is tragic and not tolerable, so we decided to challenge the whalers and give them the things they are most afraid of: attention and exposure" says campaign coordinator Arne Feuerhahn.

Using state-of-the-art technical equipment, which includes a UAV ('drone'), the group intends to expose the usually well-hidden whaling operations and to educate the public about the ongoing slaughter of endangered Icelandic wildlife.

In 2013 the Icelandic Government reissued whaling quotas for 154 endangered fin whales and 229 minke whales annually. The killing of these whales is in direct violation of the global moratorium on commercial whaling from 1986. Every year Icelandic whalers breach international agreements by hunting these marine mammals and illegally exporting their 'catch' overseas.

For information on the campaign please see: www.hardtoport.org/whaler-watching-2015/