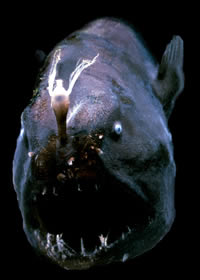 HONOLULU, Hawaii -- For centuries scientists have thought of deep-sea pelagic fish as nomadic wanderers, in part because information about them was so limited. However, new results from the ongoing Mid-Atlantic Ridge Ecosystems program (MAR-ECO), a Sloan Foundation-sponsored component of the Census of Marine Life, have revealed that these fishes may in fact be gathering at features such as ridges or seamounts to spawn. The research has important implications for how deep-sea ecosystems should be managed to prevent devastation by deep trawling activities. MAR-ECO research expeditions have also led to the discovery of as many as six fish species new to science and the collection of some unusually large deep-sea fish specimens.

"We're discovering all these patterns that we've never seen before," says Sutton, "and now we're working to figure out what they mean and how they got there. The Mid-Atlantic Ridge is proving to be an oasis in the desert , so to speak."

Pelagic fish are those species thought to spend the bulk of their time in open water, as opposed to staying near the seafloor. Classification has historically been determined based mainly on whether the fish are typically caught in open water trawl nets, or trawl gear that collects along the bottom. Deepwater pelagics include some of what most people would agree to be the most bizarre looking animals on the planet. Many, with their oversized fangs, aquatic scowls, and ingenious entrapment devices-- coupled with names such as "vampire fish from hell" and saber-toothed viper fish--are the stuff of pure nightmare save for their typically small sizes. Like the best nightmare sponsors, though, they remain mysterious.

Adequate understanding of the deepwater fishes has been hard to come by because deep-sea fish research has remained extremely limited. Not since the famous Challenger Expedition in the 1870s has a research project collected as many bathypelagic (deeper than 1,000meters) fish samples as the MAR-ECO project. In fact, the deep sea has been so thinly sampled that data compiled by the international Census of Marine Life program have shown that historically, about 50% of animal samples collected from deeper than 3,000 meters have turned out to be new species.

The Mid-Atlantic Ridge is a massive undersea mountain range that runs almost the entire length of the Atlantic about midway between the continents. To date, MAR-ECO researchers have collected more than 300 fish species there using the full spectrum of advanced tools currently available, including massive trawl nets that can be triggered to open and close at specific depths, submersibles, remotely operated vehicles, and acoustic survey instruments. Of the samples collected, more than 30 were species never before known to inhabit the Mid-Atlantic Ridge region, and six appear to be species new to science, though final determination of new species is a long process still underway for these samples.

The team also made a number of extremely rare catches. These include some of the largest dragonfishes and anglerfishes ever collected. Anglerfishes, for example, typically fit in the palm of your hand, but one sample (photo available) weighed in at 35 pounds. Another rare find was a species of whalefish previously known from only one other specimen, collected in 1975. "As soon as I saw it I was very excited," says Sutton. Such sparse sample availability has been the norm in the field, according to Sutton, leading to major difficulties at times in identifying samples that are collected. In some cases male, female and juveniles of the same species are erroneously classified as 3 separate species because only one specimen of each has been collected.

One of the major overall finds of the MAR-ECO project to date, which has included two main expeditions, is strong evidence that deep-sea pelagic fish are more closely associated with features such as the Mid-Atlantic Ridge than ever before realized. As Sutton will explain at the conference in Honolulu, the group has now collected several pieces of key evidence that these fish are congregating at the ridge, likely for spawning.

One key line of evidence was in the surprising numbers of several fish species collected, such as tubeshoulders, which spurt bioluminescent liquid. Past deep-sea work has suggested the fish are rare and widely scattered. "We're used to ones and twos," says Sutton, but we were getting tens, twenties, thirties--laundry baskets of these guys at 2,000 meters, which is pretty unusual." Most of those that were collected were gravid females, suggesting spawning activity.

Important indirect evidence was also collected, namely observation of a never before seen mysterious "scattering" layer at 2,000 meters detected using acoustic devices that generate images of materials or animals found at a given depth. Though there are other possibilities, it is quite likely the layer was a massive fish aggregation, says Sutton, because fish swim bladders and eggs tend to produce detectable acoustic signatures while squid and other organisms can typically only produce faint images.

"As we were making these discoveries, we started to wonder if these fish were coming to the ridge to aggregate and spawn," says Sutton, "This is the fist time anyone has suggested that deep-sea pelagics form groups to spawn and then disperse again, which would require some homing ability or knowledge but I can't even speculate yet on what the trigger would be."

Adding further to the idea of the ridge as a saltwater desert oasis, the MAR-ECO team was surprised to find lush growth on many parts of the ridge. "The bottom was stunning," says Sutton, "There was far more growth and coral than we could have imagined. It looks like a tropical coral reef down there in places."

Sutton says the results of MAR-ECO and other recent projects are pointing to new threats from expanding deep-sea trawling activity, and the need for near-bottom observing systems to regularly monitor deep-ocean ecosystems and their inhabitants. Without reasonable understanding of these resources, including some important commercial fisheries, protecting them is almost impossible, he says.

One of Sutton's MAR-ECO collaborators, Franz Uiblein of the Norwegian Institute of Marine Research, will also be at the press conference to discuss seafloor work on the Mid-Atlantic Ridge. Using underwater video, he and colleagues have shown that even slight disturbances to the deep seafloor from fishing activities can lead to a loss of biodiversity, for instance in a trawl's path, suggesting that widespread deep trawling can have major impacts on deep-sea life.

Though trawling on the Mid-Atlantic ridge is currently rare, as deep species such as orange roughy become fished out in other areas, trawlers are wandering to new regions. If there are pelagic spawning aggregations at the ridge or other prominent features, they are likely to be critical to the preservation of the species involved, but also likely to become primary trawling targets, which could lead to devastating effects on spawning aggregations.

"It's important that we explore and map out these hotspots before fishing stretches into these areas," says Sutton, "so that we can determine what the real damage is going to be and what needs to be protected."