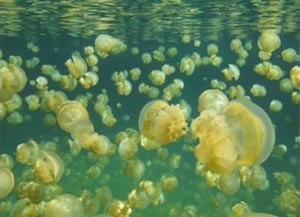 A view of Jellyfish Lake, with golden jellyfish following the sun across a wind-rippled surface. Credit: Michael Dawson, UC-Merced

MERCED, California -- If you were to snorkel just before dawn at the popular tropical Pacific destination Jellyfish Lake, you'd have lots of company: millions of golden jellyfish, known to scientists as Mastigias papua, mill around the western half of the lake, waiting for sunrise.

With the sun's first rays, Jellyfish Lake, located 550 miles east of the Philippines in the island nation of Palau, comes alive. As the sky brightens in the east, the golden jellies turn and swim toward a solar beacon.

For several hours the jellyfish swim, the contractions of their bells never stopping, until they approach the eastern end of the lake.

Following the rising sun, the jellyfish are stopped, not by the edge of the lake, but by shadows cast by overhanging trees--which they meticulously avoid.

Millions of jellyfish that started out in the west are now densely packed around the illuminated eastern rim of the lake. For a few hours around noon, they're stationary, basking in the mid-day sun directly overhead.

Later in the afternoon, the solar cycle--and jellyfish cycle--reverse, and the jellies swim westward.

Eventually the jellyfish complete one round-trip migration from west to east and back, each day between sunrise and sunset.

What the jellies are doing, say marine scientists Michael Dawson of the University of California at Merced and John Dabiri of the California Institute of Technology, is "biomixing"--as they swim, they're churning and churning the waters and nutrients of the lake.

Jellyfish like Mastigias papua and the moon jelly Aurelia aurita use their body motion, Dawson and Dabiri have found, to generate water flow that transports small copepods within feeding range. "The 'underwater turbulence' the jellies create is being debated as a major player in ocean energy budgets," says Dabiri.

He and Dawson are investigating whether biomixing could be responsible for an important part of how ocean, sea and lake waters form eddies, or ring-shaped currents, which bring nitrogen, carbon and other elements from one part of a water body to another.

Through this process, jellyfish and other zooplankton--where they're abundant, as they are in Jellyfish Lake--may in some way affect Earth's climate.

"Biomixing may be a form of 'ecosystem engineering' by jellyfish, and a major contributor to carbon sequestration, especially in semi-enclosed coastal waters," says Dawson.

With funding from the National Science Foundation (NSF)'s Division of Ocean Sciences, Dawson and Dabiri are analyzing biomixing. Among other instruments, they use SCUVA--Self-Contained Underwater Velocimetry Apparatus--to measure water flow around jellyfish.

"Applications of new technology allow us to see how processes actually occur in nature," says David Garrison, director of NSF's Biological Oceanography Program, which funded the research. "Results from this study may change some of our long-held conceptions about mixing processes in the oceans."

Jellyfish Lake, known to Palauans as Ongeim'l Tketau (for unknown reasons, "fifth lake"), is one of more than 70 saltwater lakes in the Pacific islands. The lake is now completely removed from the sea, but in the distant past, it had an outlet to the ocean.

The opening eventually closed, and the jellyfish population became isolated, reaching the millions.

At night, the jellies descend into a bottom-layer of hydrogen sulfide. Although snorkeling in the surface waters of the lake is allowed, SCUBA diving is prohibited to avoid disturbing the jellyfish, and to reduce the risk of hydrogen sulfide poisoning.

Then in 2001, the lake cooled, a new generation of jellyfish spawned, and there has been no comparable increase in temperature--or lack of jellyfish--since.

While scientists search for answers, golden jellyfish continue their age-old west-to-east-and-back-again migration, ever seeking the sun.

"The real question," says Dawson, "is whether the lake keeps the jellies alive...or the jellies sustain the lake."