Lawsuit Launched To Protect Endangered Whales From Gulf Of Mexico Oil Exploration; 'The Feds Are Still Violating The Laws' 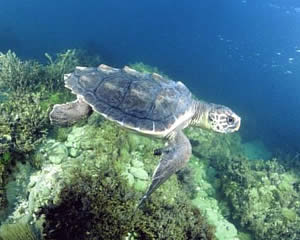 The Gulf of Mexico Fishery Management Council requested this emergency rule after a NOAA observer study documented the reef fish longline fleet was incidentally catching and killing too many loggerhead sea turtles.

This emergency rule will primarily affect longline fishermen who target shallow-water grouper species, such as red grouper. Most shallow-water grouper fishing occurs within the 50-fathom contour off the west Florida shelf – an important sea turtle feeding area – where most of the incidental sea turtle bycatches occur. The emergency rule also prohibits all reef fish longline fishing east of 85 degrees 30 minutes west longitude in the Gulf of Mexico after the quotas for deep water grouper and tilefish are reached.

"We are working closely with the council and constituents to find more permanent solutions to protect sea turtles affected by this fishing gear,” said Roy Crabtree, NOAA’s Fisheries Service southeast regional administrator. “I hope we can identify options that not only provide sea turtles the protection they need, but minimize the economic affects to the fishing industry.”

The Magnuson-Stevens Act requires that conservation and management measures minimize bycatch of non-target species and minimize mortality when bycatch cannot be avoided.

The emergency rule will be in effect for 180 days and can be extended for up to an additional 186 days. The Gulf of Mexico Fishery Management Council is considering actions to address this issue on a long-term basis.