World-Renowned Chefs Among More Than 25,000 People In 99 Countries Backing Boycott To Save Overfished Tuna

Survey: Haiti's Coral Reefs Most Overfished In The World; 'No Food Fish Of Reproductive Age' 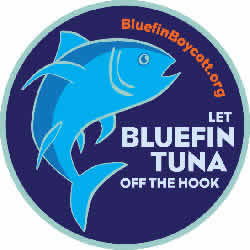 SAN FRANCISCO, California -- Two of the United States' leading chefs have joined the Center for Biological Diversity's campaign to save bluefin tuna, one of the world's most imperiled fish. Alice Waters, owner of Chez Panisse, in Berkeley, Calif., and Dan Barber, owner of Blue Hill in Manhattan, have signed a pledge not to serve bluefin in their restaurants. They join more than 25,000 people in 99 countries who have pledged not to buy or eat bluefin or frequent restaurants that serve it.

"In the sustainable food movement, the chefs at Chez Panisse and Blue Hill are important leaders with long track records of combining exquisite food and environmental ethics. We're happy they're lending their voice to this urgent campaign to save bluefin tuna," said Catherine Kilduff, a Center staff attorney. "Chefs and restaurant owners make vital decisions every day about what foods they buy and serve. By choosing not to serve bluefin, these chefs are helping to keep this remarkable fish from slipping closer to extinction."

The Center launched the bluefin boycott Nov. 30 after the International Commission for the Conservation of Atlantic Tunas refused to act to protect the species. The western Atlantic tuna stock has dropped by more than 80 percent since 1970; the eastern Atlantic stock dropped by 74 percent between 1957 and 2007.

"Chez Panisse connects with our local purveyors on a daily basis to purchase for and plan our menus and, most importantly, to keep informed of the current conditions, shortages and crisis in our waters and on our farms and ranches. Thirteen years ago when our Bay Area fish purveyor, Monterey Fish Market, notified us about the overfishing of bluefin tuna we immediately stopped serving it," said Chef Jean-Pierre MoullÃ© of Chez Panisse. "To this day we are in support of rebuilding the bluefin tuna population and the restoration of our beautiful oceans."

"Last week I saw a picture of a record-breaking, $396,000 bluefin tuna just off the auction block. As chefs and people who love to eat are shaping food fashions like never before, we ought to be getting it right. And a picture like this says we are most definitely not getting it right. If we have the power to popularize tuna to the point of extinction â which we've done, with dizzying speed and effect â we also have the power to get people to rethink what they eat, and that should include bluefin tuna," said Barber.

Bluefin, which remain a staple in some sushi restaurants, have been declining for decades due to overfishing. High prices spur rampant illegal and unreported fishing.

Bluefin tuna are oceangoing fish that can grow up to 10 feet long and weigh 1,200 pounds. Unlike almost all other fish, they are warm-blooded and able to regulate their body temperature, which helps during their epic transatlantic journeys. Top ocean predators, they sometimes hunt cooperatively, much like wolves. With streamlined bodies and retractable fins, they can bolt at speeds of 50 mph, crossing oceans in weeks.