The Incredible and Never-Ending Ballad of the Polluce Wreck 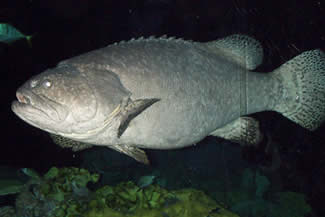 'Bubba' dead at age 24. He was the first fish to ever receive chemotherapy

-- Bubba the Grouper, the first fish in history known to have received chemotherapy and bounce back from cancer, has died, the Shedd Aquarium said Wednesday.

Shedd officials estimate Bubba, who became an instant celebrity and an inspiration to cancer patients when news of the chemotherapy was first announced, was an estimated 24 years old when he died Tuesday.

The 69.3-kilogram "super grouper" was abandoned at the Chicago aquarium in 1987, left at the reception desk in a bucket.

Shedd officials nursed the fish - then a she - to health and put her in a tank. Bubba changed gender in the mid-1990s, which is not uncommon for certain kinds of fish.

Bubba was diagnosed with cancer in 2001, and two years later, Shedd officials took the unprecedented step of administering chemotherapy.

Cancer survivors, particularly children, were inspired by Bubba's story of resilience, and he was a Shedd favourite, officials said.

"Bubba overcame some incredible odds over the years, and that's what made him so special to us," said George Parsons, director of the Shedd's Fish department.

"Every once in a while for the last three years we have been getting phone calls from kids with cancer or from their parents, wondering how he is doing," Parsons said. "It's going to be tough now, if I have to tell them he's no longer with us."