Research: Damaged Coral Reefs Can Recover, Worth Saving; 'some Say It's A Lost Cause' 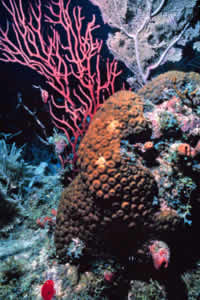 NEW HAVEN, Connecticut -- Scientists at the National Coral Reef Institute (NCRI) are currently growing more than 400 corals from the larval stage as part of a National Oceanic and Atmospheric Administration (NOAA) -funded research, and will transplant them to restore damaged coral reefs.

Producing juvenile corals from the larval stage for transplantation is better for the health and longevity of coral reefs because it produces new coral, rather than moving around already existing fragments collected in the field. NCRI is also evaluating this technique to raise and restore populations of staghorn coral, a species recently listed by NOAA as threatened under the Endangered Species Act.

"NOAA strongly supports research that will help managers develop new tools to address coral restoration,” said retired Navy Vice Adm. Conrad C. Lautenbacher, Ph.D., under secretary of commerce for oceans and atmosphere and NOAA administrator. “In this Year of the Reef (IYOR), such innovative approaches may provide a new way forward to protecting these valuable resources.”

NCRI has successfully raised more than 100 juvenile mustard hill corals and more than 300 great star corals, both essential species for the development and growth of coral reefs. The juvenile corals are being kept in indoor aquaria at the NCRI facility at the Nova Southeastern University Oceanographic Center near Ft. Lauderdale, Fla., and then are relocated to the outdoor coral husbandry system. If the corals successfully grow large enough in the outdoor system, they will be transplanted to damaged reefs.

“This work is consistent with NCRI’s mission of providing management related research output on assessment, monitoring, and especially restoration of coral reefs. We are proud to be working with NOAA on this important project,” said Dr. Richard Dodge, executive director of NCRI.

Coral reefs, a critical part of the ocean ecosystem, teem with fish, lobsters, sponges, sea turtles, and thousands of other creatures that rely on them for their survival. Coral reefs also are important to the economy, providing millions of people around the globe with food, coastal storm protection, and jobs. Nearly a quarter of the world’s reefs are under imminent risk of collapse from human pressures, and a fifth have already effectively been destroyed and show no immediate prospects for recovery.

NOAA is funding this research to develop tools to help environmental managers address these issues.