Research: Too much sugar not good for coral reefs; bacteria grow 'out of control' 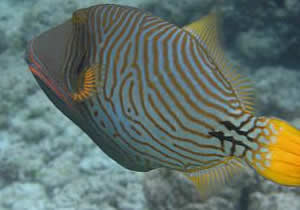 A new study found that the removal of predatory fish such as triggerfish resulted in an overpopulation of sea urchins. Â© Wildlife Conservation Society

The paper appears in the December 2010 issue of the scientific journal Ecology. The authors include Jennifer O'Leary of the University of California at Santa Cruz and Tim McClanahan of the Wildlife Conservation Society.

The authors found that reefs with large numbers of grazing sea urchins reduced the abundance of crustose coralline algae, a species of algae that produce calcium carbonate. Coralline algae contribute to reef growth, specifically the kind of massive flat reefs that fringe most of the tropical reef systems of the world.

The study focused on two areasâone a fishery closure near the coastal city of Mombasa and another site with fished reefs. The researchers found that sea urchins were the dominant grazer in the fished reefs, where the predators of sea urchinsâtriggerfish and wrassesâwere largely absent. The absence of predators caused the sea urchins to proliferate and coralline algae to become rare.

"These under-appreciated coralline algae are known to bind and stabilize reef skeletons and sand as well as enhance the recruitment of small corals by providing a place for their larvae to settle," said Dr. Tim McClanahan, WCS Senior Conservationist and head of the society's coral reef research and conservation program. "This study illustrates the cascading effects of predator loss on a reef system and the importance of maintaining fish populations for coral health."

The study also focused on the effects of herbivorous fishâsurgeonfish and parrotfishâon coral reefs. While these 'grazing' fish did measurably impact the growth rates of coralline algae in reef systems, they also removed fleshy algae that compete with coralline algae. Overall, reefs with more sea urchins grew significantly slower than ones with more complete fish communities.

The authors also found that the grazing effect was stronger and more persistent than the strong El NiÃ±o that devastated coral reefs throughout the tropics in 1998 (the study extended from 1987 until 2005). The study shows that managing coral reef fisheries can affect coral reef growth and improving the management of tropical fisheries can help these reefs to grow and persist in a changing climate.

"The survival of coral reefs is critical for hundreds of millions of people who depend on these complex systems for coastal protection, food, and tourism revenue around the globe," said Dr. Caleb McClennen, Director of WCS's Marine Program. "This study demonstrates the importance of improving fisheries management on reefs so that corals can thrive, safeguarding some of the world's most fragile marine biodiversity and strengthening coastal economies."