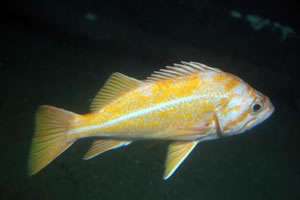 the Canary rockfish have been major recreational and commercial species, and taken by trawlers in large numbers. Credit: Tom Laidig

SANTA BARBARA, California -- UC Santa Barbara resource economists Christopher Costello and Robert Deacon will be examining the ongoing effects of a fisheries management system implemented by the National Oceanic and Atmospheric Administration (NOAA) in January 2011. Their effort is funded as part of a $1 million West Coast Sea Grant social science initiative, funded by NOAA Sea Grant and its partners.

The "catch shares" program was created and put into effect for the West Coast trawl fleet in response to concerns of overfishing and inadvertent catches of protected species and weak stocks in the highly valuable West Coast groundfish fishery, which collapsed in the late 1990's and was declared a federal fishery disaster in 2000.

The program incentivizes cooperation between fishermen, and allows them to switch from the non-selective trawl nets, which have the potential to catch sensitive species and low-value fishes along with the more desirable fishes, to more selective gear, which increases the likelihood of catching the higher-value, healthy fish populations. The program also rewards fishermen who are able to reduce harvests of sensitive, overfished species.

Meanwhile, catch and landings data, provided by NOAA Fisheries, documents the extent to which fishermen are engaging in activities that aid in the cooperative effort.

The program was controversial in its planning stages, with fishing interests reluctant to embrace the new system, as stakeholders, including the fishing industry, crafted the program over a six-year period.

The researchers also include co-investigators Steve Gaines, professor at the UCSB Department of Ecology, Evolution and Marine Biology, and dean at the Bren School of Environmental Science & Management; as well as Trevor Branch and Ray Hilborn, both fisheries science professors at the University of Washington, Seattle. They will be looking at harvests of healthy stocks before and after the catch shares program. With this information, they will be able to document whether fishermen are now coming closer to harvesting their full strong-stock quotas. They will also assess whether smaller catches of high-quality, higher-value fish with the selective gear can boost profits.

According to a NOAA Fisheries analysis, the first year of revenue data for the program shows promise that catch shares is working: Per-vessel revenues in 2011 rose 34 percent, compared with the average of the previous five years.

The scientists will also study "risk pools," where fishery participants pool their weak stock quotas to insure themselves against accidental bad hauls of low-quota stocks. Members of the risk pool may be required to use only low-impact, highly selective gear, or to halt fishing in certain areas.

A computer model will also be developed to simulate and predict conditions under which fishermen are most likely to cooperate to avoid weak-stock bycatch. To assess different policy options, the model will be run under a variety of management scenarios and compared across biological, social, and economic metrics.

"Fisheries are moving to catch shares," said Deacon. "We think they can improve the economic stability of the fishery and provide conservation benefits. We are hoping our study will add a level of comfort to stakeholders."