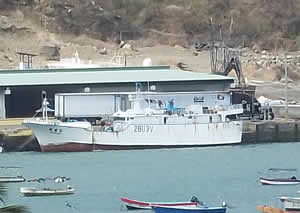 SAN JOSE, Costa Rica -- No longer able to land hundreds of tons of shark fins per year at private docks in Costa Rica, the foreign fleet is now landing its consignment of fins in Nicaragua. Concerned over the situation, Nicaraguan environmental organizations have warned governmental authorities of the situation but have yet to receive any response from the Environmental and Natural Resource Ministry (MARENA), the INTUR Ministry, and the PESCA (Fisheries) vise minister.

Last April 30 the Belize flagged vessel Hung Chi Fu 68 was photographed landing its cargo in San Juan del Sur, Nicaragua. This same boat, under its previous name Hsin Chi Tsai #6, has been documented landing its cargo at the Mariscos Wang private dock in Puntarenas, the same company that filed suit against the Costa Rican Fisheries and Aquaculture Institute (INCOPESCA) for prohibiting them of landing their cargo at private docks.

"Just like what happened with the private dock issue in Costa Rica, now in Nicaragua we have a similar problem", declared Fabio Buitrago of the Nicaraguan organization Fondo Natura. "Those that have wanted to view the landings have been denied access to the Fisheries Terminal via both by water and by land, and all landing procedures are being done at night so no one can see what's going on", added Buitrago.

"What kind of monitoring and biological observation measures are in place in order to calculate the impact of this new fisheries phenomenon in Nicaragua?" asked Edgar CastaÃ±eda, renowned Nicaraguan environmentalist. "Nicaragua cannot allow shark finning to occur here, nor can it sit back and allow the marine ecosystems that support thousands of artisanal fishers to be destroyed", stated CastaÃ±eda.

Since 1998, the foreign fleet established one of its hubs for shark fins from all of Eastern Tropical Pacific in Puntarenas, Costa Rica. As of this past December 1, the foreign fleet has been required to land at public docks in Costa Rica, in abidance with the country's General Customs Law. As a result of the enforcement of the law, the Belize flagged vessel Hung Chi Fu XII, was caught red handed last March 2 landing 2000 kg of sharks without fins, and its Taiwanese captain, Tsa Yu Jen, was fined $36,000.00.

"Without a doubt, the recent sentence against the Taiwanese captain triggered this new move of the foreign fleet to Nicaragua", said Randall Arauz, president of the Costa Rican organization PRETOMA. "Regional policy against the free operation of foreign fleets is essential, as we know that both Panama and Belize facilitate the use of their own flags to these unscrupulous business owners, and that shark fins are landed by them in Panama, El Salvador, and Guatamala", denounced Arauz.

According to the complaints, trucks with Costa Rica license plates receive all the fishery products, but is still unclear if the fins are exported directly to Asia from Nicaragua, or if they are imported into Costa Rica and then exported to Asia.

"I'm calling on the Costa Rican authorities to investigate this case and if necessary that President Laura Chinchilla, as soon as possible, prohibit by Executive Decree the importation of shark fins, and this way clean up once and for all the shark finning image that this country portrays to the rest of the world due to the foreign fleet", urged PRETOMA's campaigns consultant Miguel Gomez.