Experts: Florida's 'Mystery Eyeball' Appears To Be From A Swordfish; Likely 'Removed By A Fisherman And Discarded' 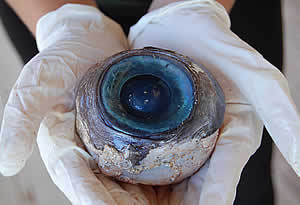 Florida scientists have said the giant mystery eyeball found on a beach is likely from a large swordfish. Credit FWCMedia

TAMPA, Florida -- After examining an eye found on a south Florida beach this week, researchers from the Florida Fish and Wildlife Conservation Commission (FWC) believe the specimen came from a swordfish. Genetic testing will be done to confirm the identification.

"Experts on site and remotely have viewed and analyzed the eye, and based on its color, size and structure, along with the presence of bone around it, we believe the eye came from a swordfish," said Joan Herrera, curator of collections at the FWC's Fish and Wildlife Research Institute in St. Petersburg. "Based on straight-line cuts visible around the eye, we believe it was removed by a fisherman and discarded."

The approximately softball-size eye was recovered by a citizen in Pompano Beach on Wednesday. FWC staff received the eye later that day. Swordfish are commonly fished in the Florida Straits offshore of south Florida at this time of year.

A highly migratory fish, swordfish can be found from the surface to as deep as 2,000 feet. Swordfish in the Atlantic can reach a maximum size of over 1,100 pounds, according to the National Oceanic and Atmospheric Administration. Swordfish feed on a wide variety of fish and invertebrates.