Man And The Last Great Wilderness: Human Impact On The Deep Sea 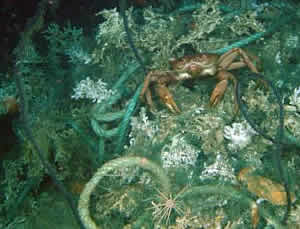 This is a trawl entangled on cold water corals in the NE Atlantic. Credit: Jason Hall-Spencer. Copyright Ifremer/AWI. 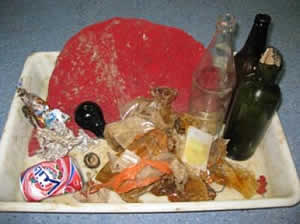 A variety of marine litter collected in the Western Mediterranean at 2,000 meters depth. Copyright Ramirez-Llodra, ICM-CSIC/BIOFUN

WASHINGTON, D.C. -- he oceans cover 71% of our planet, with over half with a depth greater than 3000 m. Although our knowledge is still very limited, we know that the deep ocean contains a diversity of habitats and ecosystems, supports high biodiversity, and harbors important biological and mineral resources. Human activities are, however increasingly affecting deep-sea habitats, resulting in the potential for biodiversity loss and, with this, the loss of many goods and services provided by deep-sea ecosystems.

These conclusions come from an international study conducted during the Census of Marine Life project SYNDEEP (Towards a First Global Synthesis of Biodiversity, Biogeography, and Ecosystem Function in the Deep Sea). The authors, over 20 deep-sea experts, conducted a semi-quantitative analysis of the most important anthropogenic impacts that affect deep-sea habitats at the global scale in the past, present and future scenarios. The impacts were grouped in three major categories: waste and litter dumping, resource exploitation, and climate change. The authors identified which deep-sea habitats are at highest risk in the short and mid-term, as well as what will be the main anthropogenic impacts affecting these areas, in a paper published in PLoS ONE on 1st August 2011.

During the Census of Marine Life program, a ten-year program that investigated diversity, distribution, and abundance of life in the global ocean and which ended inn 2010, researchers from its five deep-sea projects sampled and studied the different deep-sea habitats around the globe. The analysis of the current article is based on the results of the Census of Marine Life projects, synthesized during SYNDEEP, and also from data published previously in the scientific literature.

In the past, the main human impact affecting deep-sea ecosystems was the dumping or disposal of litter into the oceans. These activities were banned in 1972, but their consequences are still present today, together with the continuing illegal disposal of litter from ships and the arrival of litter and contaminants from coastal areas and river discharges. In particular, the accumulation of plastics on the deep seafloor, which degrade into microplastics, called mermaid tears, that can be ingested by the fauna, has consequences still unknown but predicted to be important. Moreover, there is increasing evidence of the accumulation of chemical pollutants of industrial origin, such as mercury, lead and persistent organic pollutants (e.g. dioxins, PCBs) in the sediment and fauna, including in species of commercial interest.

Currently, and because of the reduction of resources on land and in shallow waters, the largest direct impacts come from the exploitation of deep-sea resources and, in particular, from fisheries. In the future, however, the authors of this study predict that the most pervasive impacts may come from ocean acidification and climate change, which act at the global scale and can have important effects from surface waters to the abyssal seafloor. Some of these effects include an increase in water temperature that can cause important changes in stratification of the water column, accumulation of nutrients, and oceanic water circulation with corresponding alteration of hypoxia and faunal community structure.

Most importantly, the authors predict synergies amongst certain anthropogenic impacts and, in particular, between climate change and activities such as resource exploitation, wherein combined impacts may be particularly deleterious to deep-sea faunal communities.

According to the experts, seamounts, cold-water corals, upper margin slopes and submarine canyons are the habitats most likely to be affected by anthropogenic impacts in the short and mid time scale. The activities that may be of highest impact are deepwater fishing together with climate change and ocean acidification, as well as the accumulation of marine litter and chemical pollutants. The authors also highlight other activities that may put at risk deep-sea communities in the near future: mineral extraction at hydrothermal vents and possibly on abyssal plains. These extractive activities will target important deposits of copper, nickel and cobalt in the manganese nodules of the Pacific abyssal plain, deposits of manganese, iron, cobalt, cupper and platinum in the ferromanganese crust of seamounts, and large amounts of exploitable metals (gold, zinc, copper, lead, cadmium and silver) in the massive sulphide deposits of hydrothermal vents. It is in these hydrothermal vents where the impact of mineral exploitation is likely to happen first. This exploitation appears to be commercially viable and detailed pilot projects and environmental impact assessments have been conducted in areas of Papua New Guinea, where extraction should start in the near future. Although researchers, industry and policy makers have worked together since the start to evaluate potential impacts and minimize extraction effects, the real impact of such industrial activity is unknown as our knowledge of the biodiversity and functioning of hydrothermal vents, both active and extinct, is still limited. The results of this review and synthesis are especially timely, given increasing interests in mining the deep-sea floor, including mining of rare earth elements, a crucial resource for novel electronic equipment and green-energy technologies.

The main problem is that we still know very little of what we call the deep sea, making it difficult to evaluate accurately the real impact of industrial activities, litter accumulation and climate change in the deep sea habitats. The deep sea is considered to expand from the end of the continental shelf at approximately 200-250 m depth to the great abyssal depths between 3000 and 6000 m, which may reach down to 11 km in areas such as the Mariana Trench. The deep seafloor covers 73% of the oceans with an estimated area of 326 million square kilometers. Of this great expanse, only the area equivalent to a few football fields has been sampled biologically. We continue, therefore, to discover new habitats and species, but the negative impacts of human activity appear to be much faster in reaching the great depths of our oceans.