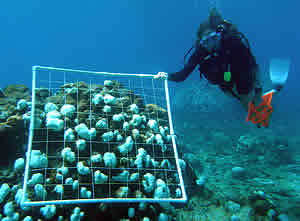 Coral reefs suffered record losses as a consequence of high ocean temperatures in the tropical Atlantic and Caribbean in 2005 according to the most comprehensive documentation of basin-scale bleaching to date. Collaborators from 22 countries report that more than 80 percent of surveyed corals bleached and over 40 percent of the total surveyed died, making this the most severe bleaching event ever recorded in the basin. The study appears in PLoS ONE, an international, peer-reviewed, open-access, online publication.

Satellite-based tools from NOAA's Coral Reef Watch Program guided site selection for field observations conducted across the greater Caribbean region from June to October 2005. Field surveys of bleaching and mortality in this study surpass prior efforts in both detail and extent.

This study also substantially raised the standards for documenting the effects of bleaching and for testing satellite and forecast products. Coral bleaching occurs when stress causes corals to expel their symbiotic algae, or zooxanthellae. If prolonged or particularly severe, it may result in coral death.

"Heat stress during the 2005 event exceeded any observed in the Caribbean in the prior 20 years, and regionally-averaged temperatures were the warmest in at least 150 years," said C. Mark Eakin, Ph.D., coordinator of NOAA's Coral Reef Watch Program. "This severe, widespread bleaching and mortality will undoubtedly have long-term consequences for reef ecosystems, and events like this are likely to become more common as the climate warms."

Through this survey, several species and localities reported bleaching for the first time, including the first known bleaching of any kind in Saba, the first documented mass bleaching at the Flower Garden Banks National Marine Sanctuary, and the first reported mass bleaching in Virgin Islands National Park of Acropora palmata, a species listed as threatened under the U.S. Endangered Species Act in 2006.

The Caribbean is suffering severe bleaching again this year, and in some locations, this bleaching event is worse than the event in 2005. Not only are temperatures causing further damage to reefs hit hard during the 2005 event, but new locations have also been impacted.

The decline and loss of coral reefs has significant social, cultural, economic and ecological impacts on people and communities throughout the world. As the "rainforests of the sea," coral reefs provide economic services â€" jobs, food and tourism â€" estimated to be worth as much as $375 billion each year.

This research was supported by the NOAA Coral Reef Conservation Program. Its research and monitoring program covers all shallow-water and deep-water coral reef ecosystems under the jurisdiction of the United States and is intended to inform resource managers, scientists, policymakers and the public.