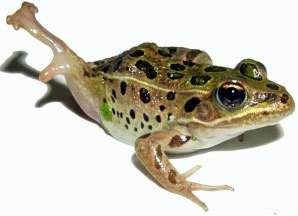 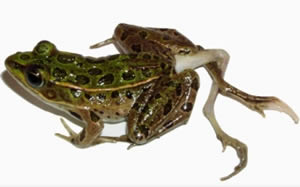 Environmental factors causing frog deformities were a mystery until this study. Courtesy Pieter Johnson, University of Colorado at Boulder

BOULDER, Colorado -- High levels of nutrients used in farming and ranching activities fuel parasite infections that have caused highly publicized frog deformities in ponds and lakes across North America, according to a new study led by the University of Colorado at Boulder.

The study showed increased levels of nitrogen and phosphorus cause sharp hikes in the abundance and reproduction of a snail species that hosts microscopic parasites known as trematodes, said Pieter Johnson of the University of Colorado, Boulder. The nutrients stimulate algae growth, increasing snail populations and the number of infectious parasites released by snails into ponds and lakes. The parasites subsequently form cysts in the developing limbs of tadpoles causing missing limbs, extra limbs and other severe malformations, Johnson said.

"This is the first study to show that nutrient enrichment drives the abundance of these parasites, increasing levels of amphibian infection and subsequent malformations," said Johnson. "The research has implications for both worldwide amphibian declines and for a wide array of diseases potentially linked to nutrient pollution, including cholera, malaria, West Nile virus and diseases affecting coral reefs."

Johnson is the lead author of a study on the subject published online the week of Sept. 24 in the Proceedings of the National Academy of Sciences. The National Science Foundation funded the work.

Deformed frogs first gained international attention in the mid-1990s when a group of Minnesota schoolchildren discovered a pond where more than half of the leopard frogs had missing or extra limbs, he said. Since then, reports of deformed amphibians have become widespread in the United States, leading to speculation they were being caused by factors like pesticides, increased ultraviolet radiation or parasitic infection.

While parasite infection is now recognized as a major cause of such deformities, the environmental factors responsible for increases in parasite abundance had largely remained a mystery until the study was undertaken, Johnson said.

"One of our main goals was to understand how parasites are going to respond to land-use changes and ecosystem alterations," he said. "What we found is that nitrogen and phosphorus pollution from agriculture, cattle grazing and domestic runoff have the potential to significantly promote parasitic infection and deformities in frogs."

The trematode has a complex life cycle that involves three host species, he said. In addition to the infectious stage in snails and the cyst stage in frogs, the parasites rely on predators including wading birds to complete their life cycle by consuming infected frogs and spreading the parasite back into the ecosystem through defecation.

The research team built 36 artificial ponds in central Wisconsin similar to farm stock tanks -- a common breeding site of frogs and salamanders -- and stocked each with selected numbers of snails and tadpoles of the green frog. In addition to adding nutrients, the researchers took on the role of birds in the trematode life cycle by adding parasite eggs to the tanks, then measuring the subsequent ecological responses.

In ponds with added nutrients, snail biomass increased by 50 percent and the snails increased parasite egg production by up to eight-fold, he said. The infection rate in frogs rose by two to five times in those tanks, Johnson said.

As few as 12 trematode larvae, known as cercariae, can kill or deform a single tadpole by burrowing into their limb regions and disrupting normal leg development, he said. A single infected snail can produce more than 1,000 cercariae in one night. Frogs that become deformed rarely survive long in the wild, he said.

"We were able to watch nutrient pollution move through the life cycle of the parasite as it cascaded through the food web," he said. "Since most human diseases involve multiple hosts, understanding how increased nutrient pollution affects freshwater and marine food webs to influence disease is an emerging frontier in ecological research."

A recent study of more than 6,000 species of amphibians worldwide concluded that 32 percent were threatened and 43 percent were declining in population. While the causes range from habitat loss to emerging disease, the researchers are now exploring how nutrient pollution and limb malformations contribute to the pattern, Johnson said.