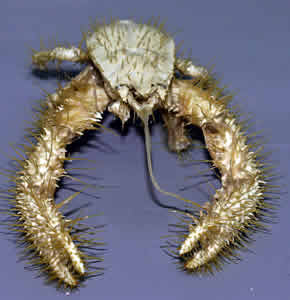 CORVALLIS, Oregon -- A species of crab found a thousand feet below the surface of the Pacific Ocean near Costa Rica lives off the bacteria on its claws â bacteria that it fertilizes by waving them in methane and sulfide released from the seafloor.

This "farming" behavior was described for the first time in detail by the scientists this week in the journal PLoS One.

This new species of the Yeti crab, called Kiwa puravida, was first discovered in 2006, according to Andrew Thurber, a post-doctoral researcher at Oregon State University and lead author of the study. It is only the second member of the Yeti family of crabs â first discovered in 2005 â and illustrates how little scientists know about the deep ocean environment, the researchers say.

"We watched the crabs wave their claws back and forth in fluid from a methane seep, and rather than trying to capture bacteria, it appeared that they were providing food to the bacteria already growing on their claws," Thurber said. "There isn't sufficient food that deep that is derived from the sun's energy, so vent and seep animals harness chemical energy released from the seafloor.

"These bacteria are specialists and can be found on a variety of crustaceans â crabs, shrimp and barnacles â near seeps and vents," added Thurber, who is in OSU's College of Earth, Ocean and Atmospheric Sciences. "But we hadn't before seen that kind of 'farming' behavior in which the host waves its symbionts in seep fluid."

Thurber, who did much of the research as a doctoral student at the Scripps Institution of Oceanography, wasn't part of the 2005 that found the first Yeti crab, but participated in the 2006 expedition that discovered Kiwa puravida, and follow-up cruises in 2009 and 2010 that collected the crabs using the submersible Alvin.

Having the specimens allowed the scientists to more closely examine the bacteria on their claws and run their genetic code through GenBank â an international database that includes thousands of species of bacteria. They discovered that it is most similar to bacteria found on crabs and shrimp living near hydrothermal vents.

Thurber said symbiotic behavior in nature is common, but few animals are known to behave in quite the same way as Kiwa puravida. Some organisms, including mussels and tubeworms, have symbionts inside of them that allow them to harness chemical energy, while others that do not have symbionts â including barnacles â wave their appendages to grab food as it goes by. This new species is the only one that combines the two, by using symbionts on its appendages and waving those bacteria-laden appendages in seep fluid to capture chemical energy as a food for themselves.

Lipid and isotope analyses showed that these epibiotic bacteria are the crabs' main food source, though Thurber said they may be getting a small amount of sun-derived energy from dead plankton that have filtered down through the water column.

Thurber said the crabs harvest the bacteria growing on their claws by using a specially adapted appendage to scrape the bacteria off their bodies and bring it to their mouths, and then continually waving their claws near methane seeps to boost the bacteria's productivity.

Only one specimen of the original Yeti crab, K. hirsuta, has been collected and that was near a hydrothermal vent. About 30-40 specimens of Kiwa puravida have been examined and the scientists believe they may exist at similar methane seeps.

"Since this entire family of crabs wasn't even discovered until 2005, there is a strong possibility other species are out there," Thurber said.

Other authors on the study are W. Joe Jones of the University of South Carolina and Kareen Schnabel of the National Institute of Water and Atmospheric Research in Wellington, New Zealand.