Underwater Exploration Seeks Evidence Of Early Americans; 'We Have Found The Haystack' 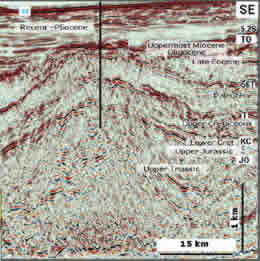 A seismic reflection image of the Mount Ashmore buried dome.

CANBERRA, Australia -- Scientists from The Australian National University have identified a dome at least 50 kilometres in diameter, buried under the Timor Sea that was created by a giant asteroid that collided with Earth around 35 million years ago - a period of heavy extraterrestrial bombardment.

Their findings, which could suggest a link between these impacts and a sharp fall in global temperatures preceding the formation of the Antarctic ice sheet, have been published in the new issue of the Australian Journal of Earth Sciences.

Seismic surveys in areas straddling the Ashmore Platform and Browse Basin led oil company geologist Dariusz Jablonski of Finder Exploration to suspect the large impact. Dr Glikson, who is a specialist in the study of extraterrestrial impacts, from the Planetary Science Institute and the School of Archaeology and Anthropology at ANU, was asked to study cuttings from the Mount Ashmore-1B well.

Dr Glikson said "The minimum size of the Mount Ashmore dome, which represents elastic rebound doming of the Earth crust triggered by the impact, is 50 kilometres at the base, but the full size of the impact crater - not yet defined - may be significantly larger".

"The identification of microstructural and chemical features in drill fragments taken from the Mount Ashmore drill hole revealed evidence of a significant impact," Dr Glikson said.

Dr Glikson said that the period when the asteroid hit coincided with a time of heavy asteroid bombardment of the Earth, which may have played a role in the sharp drop in global temperatures at the time.

"Round the same time as the Mount Ashmore impact, a 100 kilometre wide asteroid impact structure formed in Siberia, and another measuring 85 km in diameter in Chesapeake Bay, off Virginia, in the United States. Likewise a large field of tektites â molten rock fragments splashed by impact â fell over northeast America. This defined a major impact cluster across the planet," he said.

"This impact cluster hit Earth about one million years before the Drake Passage, the ocean gap between Antarctica and South America, opened up. The opening of the Drake Passage allowed continuous circulation of the circum-Antarctic ocean current, isolating the Antarctic continent and allowing the onset of its large ice sheet, which acts as a 'thermostat' for the Earth's climate."

Dr Andrew Glikson said that the increase in geophysical surveys and drilling associated with oil exploration over the last few decades has allowed the identification of a number of large impact structures onshore and off the coast of Western Australia.