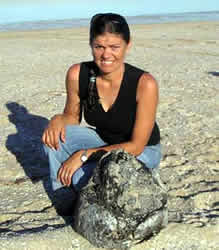 Loralee, is the lucky lady who found the ambergris pictured here on this beach south of Streaky Bay

A family on South Australia's west coast has discovered a rare specimen of whale vomit on the beach that is tipped to be worth over $1 million.

The specimen, known scientifically as ambergris, is sought after by perfume companies and worth about $US20 per gram.

The sample found on a beach near Streaky Bay weighs 14.75 kilograms.

Ken Jury, who is representing the family, says this is the first discovery of ambergris in South Australia.

He says the last specimen found in Australia was in Queensland.

"Two small pieces were found that I would suggest together would make up half the size of the one that's been found at Streaky Bay, and they realised something like $190,000 each," he said.