Researchers Awarded $3.9M For Lab Under The Sea; 'No One Has Ever Done A Project Like This Before' 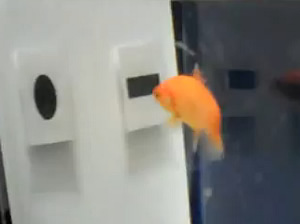 A professor has trained a goldfish to recognize objects

Caroline DeLong, an assistant professor of psychology at Rochester Institute of Technology, is a real-life Doolittle whose research focuses on object discrimination in goldfish and echolocation in dolphins to bring scientists closer to unlocking the mysteries of animal perception and cognition.

DeLong's theories suggest that marine animalsâfrom intelligent dolphins to pet-store goldfish with tiny brainsâmay recognize and represent objects similarly to humans. Specifically, they may be able to recognize an object from any orientationâcalled object constancyâ just like humans can.

DeLong has been studying animals for about 20 years. Research by DeLong and other scientists on echolocation, or biological sonar, can help engineers create advanced software and hardware capable of underwater object recognition. Biomimetic sonar systems, based on the structure and function of animal sonar systems, outperform traditional manmade sonar systems.

"Learning about cognitive processes that dolphins engage in during echolocation can help the Navy or NASA to build a superior biomimetic system," DeLong says.

DeLong has started a new line of research on visual object recognition using goldfish so that students can be directly involved in training animals in her lab. In a controlled environment, DeLong and her students have trained goldfish to recognize a black circle attached to the tank, and to choose that circleâeven when other shapes (rectangles) are also present. The fish tap the circle with their mouths to receive a food reward. Eventually, DeLong and her students will investigate whether the fish perform the same as humans, pigeons or monkeys on tests of object constancy.

"This partnership with the zoo will allow me to share my research with zoo visitors," adds DeLong. "Specially designed exhibits and programs will engage zoo visitors and allow me to collect lots of interesting new data. This is a researcher's dream project."

See the video of the experiment.