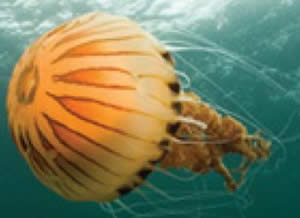 By sampling sea life in a heavily fished region off the coast of Namibia, researchers have found that jellyfish have actually overtaken fish in terms of the biomass they contribute to this ocean region. The findings represent a careful quantitative analysis of what's been called a "jellyfish explosion" after intense fishing in the area in the last few decades. The findings are reported by Andrew Brierley, of the University of St. Andrews, and his colleagues in the July 12th issue of the journal Current Biology.

An increasing abundance of jellyfish off Namibia had been noted for some time, but an analysis of this trend's effect on the ecosystem has been hampered by a lack of hard data on jellyfish abundance. The authors note that prior to their work, less formal observations had pointed to a striking change over time--for example, jellyfish are now so numerous in the region that they significantly interfere with fishing operations and industrial water-uptake systems. In addition, large jellyfish species such as Chrysaora hysoscella and Aequorea forskalea have become more commonly reported.

In their new work, the researchers sampled waters all along the Namibian shelf, between the borders of Angola and South Africa, in an area known as the northern Benguela. In the past, this region has offered abundant fish stocks, thanks largely to its being served by cool, nutrient-rich upwellings occuring along the continental shelf. The fish stocks, including sardines and anchovies, have been heavily exploited since the 1970s and have been strongly depleted in the process. Because fish and jellyfish essentially compete for similar nutrient resources, a dramatic decline in fish populations could theoretically contribute to a substantial shift in the abundance of jellyfish.

The researchers' findings indicate that jellyfish now account for significantly more biomass in the northern Benguela waters than do fish. Based on the data they obtained--by using scientific echosounders and trawl nets to sample jellyfish and fish in an area of over 30,000 nautical miles--the researchers estimate the total biomass of jellyfish in the region to be 12.2 million metric tons (mostly contributed by the large A. forskalea species), whereas the biomass of fish accounts for only 3.6 million metric tons.

In their report, the authors point out that jellyfish biomass has risen in numerous locations worldwide, possibly as a consequence of fishing. Climactic changes could also contribute to jellyfish population shifts.

The authors also note that jellyfish have few predators and that jellyfish abundance has significant potential consequences for oceanic ecosystems--such consequences include slowed or attenuated fish-stock recovery and alterations in the nature of carbon cycling.