Researchers Searching For War Of 1812 Shipwrecks In Lake Ontario 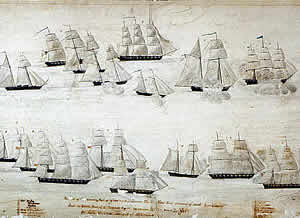 The Great Lakes were a crucial battle zone for the United States and Great Britain during the War of 1812. 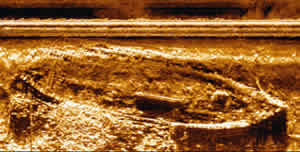 A sidescan sonar image of a Lake Ontario wreck made by Ben Ford.

INDIANA, Pennsylvania -- The Titanic may be disintegrating, but if two Indiana University of Pennsylvania professors have their way, shipwrecks from the War of 1812 won't face the same fate.

Dr. Katie Farnsworth, IUP Geoscience Department, and Dr. Ben Ford, Anthropology Department, are preparing for a June survey of the Black River Bay, in the northeast corner of Lake Ontario, to find and identify two shipwrecks. They received $14,888 from the National Geographic Society in support of their research project.

Farnsworth and Ford will search for a frigate called the Mohawk, a product of the naval arms race between the Americans and the British, and an unnamed gunboat designed for amphibious attacks and harassing British shipping. They chose these vessels, Ford said, because he has data suggesting the gunboat's location and reason to believe the Mohawk is within a few miles of it.

From the survey, they hope to gain insight into the modernization of U.S. Navy ship construction, but also into the history of sedimentation in the bay.

The Great Lakes were a crucial battle zone for the United States and Great Britain during the War of 1812, with each side racing to build a superior fleet of military vessels. Nearly 200 years later, shipwrecks from the war remain in the bed of the Great Lakes.

The shipwrecks will be buried, at least in part, by sediment that entered the lake from the surrounding watershed, Farnsworth said. Sediment flux into the bay would have been substantial in the early 1800s because of agricultural growth and deforestation in upstate New York, and Farnsworth and Ford hope to quantify the sedimentation pattern.

Field tools and techniques they will use include side-scanning sonar, sub-bottom chirp profiling, magnetometry, archaeological diver inspections, and sediment coring.

Undergraduate and graduate students from both the Geoscience and Anthropology departments will be involved in all aspects of the projectâfrom the field surveys to data analysis and synthesis.

During their fieldwork in the summer, Farnsworth and Ford plan to provide public talks near the survey site. If they are able to find and identify the ships, Ford hopes to return the following year to excavate portions of the wrecks. Any artifacts raised would be conserved and included in a museum exhibit in the Great Lakes region.

About Katie Farnsworth Farnsworth is a geologist with a particular interest in the connection between land and ocean. Coastal sedimentary processes, the flux and fate of fluvial sediment in the shallow ocean, and global flux of sediments are among her main research interests.

Classes Farnsworth teaches at IUP include Oceans and Atmospheres, Surficial Processes, Sedimentary Petrology, and Research Methods in the Geosciences.

She received both her Ph.D. and Master of Science degrees in marine geology from Virginia Institute of Marine Science/College of William and Mary. Farnsworth received a B.S. in geography and computer science from DePauw University.

About Ben Ford Ford is a historic and underwater archaeologist who has done extensive research on Lake Ontario. North American historical archaeology, nautical archaeology, geographic information systems, and remote sensing applications in archaeology are among his research interests. Ford also has extensive experience in applied archaeology, having worked in both the public and private sectors.

He received his Ph.D. in anthropology from Texas A&M University through the Nautical Archaeology Program. His dissertation, "The Lake Ontario Maritime Cultural Landscape," integrated marine and terrestrial archaeological survey techniques to analyze human interaction with the shore environment between 5000 B.P. and AD 1900.

Ford holds an M.A. from the College of William and Mary, where "Shipbuilding in Maryland, 1631â1850" was the focus of his master's thesis.