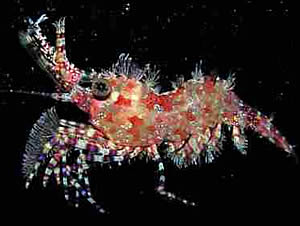 A marble shrimp (Saron marmoratus) found in the coastal waters of Moorea, a Pacific island near Tahiti. Photo courtesy of Gustav Paulay

GAINSVILLE, Florida -- University of Florida researchers are collecting marine invertebrates on the French Polynesian island of Moorea as part of a massive effort to inventory the DNA sequence of every living species there.

The genetic information collected by scientists from UF’s Florida Museum of Natural History is part of a whole-system approach that will be used to study ecological processes in depth across the entire island. Moorea’s coral reefs in particular are considered crucial indicators of how natural systems respond to climate change.

“Nobody has ever sequenced a single place to this level,” said Gustav Paulay, the project’s team leader for marine invertebrates and the Florida Museum’s curator of marine malacology. “And nobody has ever investigated coral reef biodiversity this thoroughly in one place.”

The three-year Moorea Biocode Project is now in its second year. Several Florida Museum researchers are in the field using scuba gear, snorkels and wading nets to collect specimens for the first-of-its-kind project.

The Florida Museum scientists are one of seven teams collecting specimens on everything from terrestrial vertebrates to algae. Marine invertebrates make up about 50 percent of the species on the island, which is about 37 miles in circumference and 11 miles from Tahiti.

Based at the UC Berkeley Richard B. Gump South Pacific Research Station on Moorea, the UF team collects specimens up to three times a day. The catch includes crabs, shrimp, plankton, mollusks and worms.

Back at the research station lab, the larger specimens are grouped by appearance. The researchers select individual specimens from each grouping to photograph and take tissue samples. The samples are sent to an on-site DNA extractor for immediate preparation, and the DNA is shipped to the Smithsonian Institution for sequencing.

“We can answer all these things in ecology and evolution and resource management if we have a dictionary to the DNA,” Paulay said. “We’re building that dictionary.”

Attempting to collect all species of marine invertebrates is a daunting task. To meet the challenge, Paulay’s team divides the works into three sizes: macro (anything longer than four-tenths of an inch), meso (smaller but visible) and micro (less than 1 mm in length).

Paulay hopes to effectively cover the macro fauna, but even that is impossible, he said. Rare things live in strange places. Other things migrate into the area every couple of years. Meso-organisms are even more difficult. Paulay’s team uses a number of extractive methods, such as shaking them out of sand and rock, to get as many unique specimens as possible.

Microfauna are the most challenging of all. The coral reefs are full of them, like microscopic plankton in sea water and minute worms in sand and rock. Paulay’s team is exploring methods of community DNA extraction. This approach involves running a simultaneous DNA analysis on all organisms found in a sample such as sand. Cluster patterns in the DNA sequences will help indicate individual species. Modern technology can sequence millions of genes at once, making the technique possible.

Larger invertebrates are easier to find, but they still provide plenty of surprises.

“You’re always expecting to see things you haven’t seen before,” Paulay said. “Just about every day there’s some really weird thing coming in.”

Paulay estimates more than 5 percent of the macrofauna his team collects are new genera and species. The team recently found a new species of crab in deep water that looks like a transition species between a hermit crab and a free-moving crab. It wears a clam shell instead of a snail shell, and its main body has a crab-like triangular shape.

“I knew enough about hermit crabs to know this was pretty special, “Paulay said. “So I e-mailed a picture of it to a specialist and got an answer back the next day.”

Having such a vast store of genetic information for Moorea is also bound to attract a lot of additional research, Paulay said. The island’s coral reefs are being studied under a long-term ecological research project funded by the National Science Foundation. And DNA information from the Moorea project is being uploaded to a global sequencing effort known as the Barcode of Life, which hopes to collect a DNA sequence for every living thing on the planet.