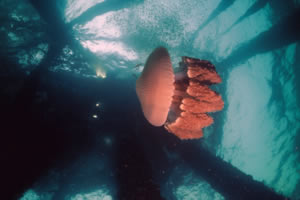 It might seem surprising that marine scientists are proposing a way for the oil and gas industry to save billions of dollars decommissioning old offshore rigs, but it's a plan where the main beneficiary is intended to be the environment.

In a new paper for the journal Frontiers of Ecology and the Environment, published by the Ecological Society of America, three scientists from the University of Technology, Sydney propose a large-scale expansion of the so-called "rigs-to-reefs" concept ŌĆ" leaving decommissioned rigs where they stand or moving them elsewhere to create artificial reefs.

Professor David Booth, Dr Peter Macreadie and Ashley Fowler have formed the Decommissioning Ecology Group to promote consideration of the idea, which Professor Booth took to the national congress of the Australian Petroleum Production and Exploration Association in Perth this week.

"The oil and gas industry worldwide is looking at the decommissioning of 6500 offshore rigs by 2025," Professor Booth said. "In Australia more than 60 rigs face decommissioning soon and government policy is still not set. Policy based on science is badly needed in this area.

"A rigs-to-reef project in the Gulf of Mexico dates back to 1979, but most other regions of the US and the world still require complete removal of subsea structures. With mandatory removal targets set to increase, removal and disposal activities will cost the industry billions and would leave a major carbon footprint."

In their article Macreadie, Fowler and Booth caution that a lot more research is needed, but artificial reefs potentially have important benefits in deep-sea locations.

"Rigs themselves have been described as 'de facto marine protected areas' because they exclude trawl fishing and their large internal spaces offer shelter to fish and other organisms," the authors said.

"Deep-sea communities in particular may benefit because the characteristics of their species (longevity, slow growth, late reproduction, low fecundity) make them highly vulnerable to exploitation.

"We suggest that a rigs-to-reef program in the deep sea, in conjunction with the establishment of marine protected areas, may offer a means of conserving deep-sea communities.

"Partnerships between scientists and industry, such as the SERPENT project, will improve the capacity for further research.

"We recommend that industry savings from a rigs-to-reef program should support independent research and monitoring to evaluate the effectiveness of rigs in fulfilling their intended purpose as artificial reefs in the deep sea."