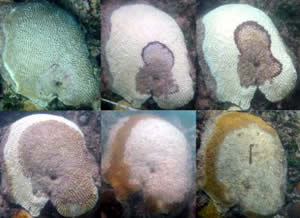 WASHINGTON, D.C. -- Mass coral bleaching has devastated coral colonies around the world for almost three decades. Now scientists have found that bleaching can make corals more susceptible to disease and, in turn, coral disease can exacerbate the negative effects of bleaching. A paper in the October issue of the journal Ecology shows that when they occur together, this combination of afflictions causes greater harm to corals than either does on its own.

"Traditionally, scientists have attributed coral declines after mass bleaching events to the bleaching only," says Marilyn Brandt, a post-doctoral researcher at the University of Miami and the lead author on the paper. "This study shows that the interplay between diseases and bleaching can play a much larger role than we realized."

Corals rely on algae that live inside each coral polyp to provide nutrients and supplemental oxygen. Bleaching occurs when these colorful algae die out or leave the polyps, often in response to overly warm conditions. Without their brightly colored algae, the coral's skeleton becomes visible through its transparent tissue, making it appear white. Although the tissue remains intact and can recover over time, this stressful condition can cause corals to stop growing and reproducing.

Warmer water temperatures can also lead to increased incidence of coral diseases, which, unlike most bleaching, can cause irreparable loss of coral tissues. In many cases, bleaching and disease occur concurrently on coral reefs. Brandt and her colleagues wondered if the occurrences of bleaching and disease were linked beyond simply occurring under the same conditions.

"Coral bleaching and coral diseases are both related to prolonged thermal stress," says Brandt. "But we wanted to look closer to find out whether they were interacting and what was actually causing the decline we see."

In the summer and fall of 2005, the same oceanic temperature shifts that contributed to the creation of Hurricane Katrina caused a warm mass of water to settle over the northeast Caribbean and parts of Florida. This sustained warming triggered a mass coral bleaching event that affected up to 90 percent of coral reef cover in the area. Brandt and her colleagues surveyed colonies in the Florida Keys before, during and after this event to determine the relationship between bleaching and coral disease.

The researchers found that the coral diseases they observed were related to bleaching, but in different ways. The prevalence of white plague disease increased during the bleaching event, an observation that Brandt says may have to do with increased susceptibility to the disease.

"Higher temperatures can increase the growth rate of coral pathogens, such as bacteria and other microbes, so we probably see a higher disease incidence because of the expansion of these pathogens in the environment," Brandt says. "But bleaching is also a stressed state, and just like any other animal under stress, the coral's disease resistance is lowered."

In addition, the researchers found that colonies already infected with another disease, known as dark spot disease, suffered more extensive bleaching than healthy corals. Brandt thinks a fungus that's likely associated with this infection could cause the relationship of the algae and the coral to be weakened, leaving the corals more susceptible to bleaching.

Because diseases happen on a much finer scale than mass bleaching events, Brandt says that more informed management of coral ecosystems should involve more frequent monitoring to determine the underlying causes of coral damage.

"Understanding how these different stressors interact can help explain the mortality pattern we see after large-scale bleaching events," says Brandt. "If we understand what's causing the mortality, we can institute control measures that are more specific to the causes."