NBA Star: 'There Are No Such Thing As Shark Attacks'

Famed Chef Alice Waters Swears Off Shark Fins; Other Chefs Encouraged To Do The Same 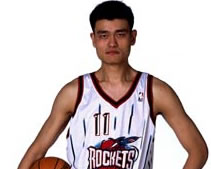 "I pledge to stop eating sharks fin soup and will not do so under all circumstances," Yao said.

"Endangered species are our friends," Yao said at a news conference organized by the London-based conservation group WildAid.

The group said China is the world's biggest importer of shark's fins, which conservationists say are cut from sharks that are thrown back into the ocean to die.

"As the human population increases, many wildlife species are decreasing, and the primary reason is that humans fail to treat animals as friends," said Yao, who played for the Shanghai Sharks basketball team before moving to the Houston Rockets.

WildAid cited U.N. estimates that more than 100 million sharks are caught annually for fins and other body parts.

"China alone can save the sharks," said Steve Trent, president of WildAid. "If sharks are to survive we need to see a decline in shark fin consumption and new actions by government to control imports and consumption."

Accurate figures on China's shark-fin imports are hard to obtain because of poor monitoring, conservationists say.

Hong Kong imported 11,662 tons of dried shark fin in 2003, most of which were shipped to mainland China, according to TRAFFIC, a wildlife trade monitoring group.

Yao also is to appear in a conservation advertising campaign for wildlife other than sharks.

A television commercial shown at Yao's news conference features the 2.16-meter (7-foot-1) center jumping up from a basketball court to block a bullet fired at an elephant.

The commercial will be shown on Chinese state television and other broadcasters, WildAid said.