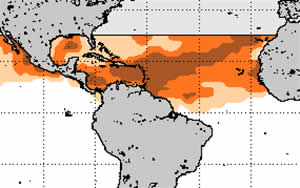 WASHINGTON, D.C. -- Scientists from NOAA’s Coral Reef Watch Program say conditions are favorable for significant coral bleaching and infectious coral disease outbreaks in the Caribbean, especially in the Lesser Antilles. The forecast is based on the July NOAA Coral Reef Watch outlook, which expects continued high water temperatures through October 2009.

Scientists are concerned that bleaching may reach the same levels or exceed those recorded in 2005, the worst coral bleaching and disease year in Caribbean history. In parts of the eastern Caribbean, as much as 90 percent of corals bleached and over half of those died during that event."

“Just like any climate forecast, local conditions and weather events can influence actual temperatures. However, we are quite concerned that high temperatures may threaten the health of coral reefs in the Caribbean this year,” said C. Mark Eakin, Ph.D., coordinator of NOAA’s Coral Reef Watch.

Prolonged coral bleaching of more than a week can lead to coral death and the subsequent loss of coral reef habitats for a range of marine life. It also affects local economies and tourism.

“By providing local officials with advance warning that a bleaching event is about to occur, some steps can be taken to protect the corals,” said Eakin. “Possible responses include mobilizing monitoring resources to measure extent and impact of bleaching, and establishing temporary restrictions on other reef uses like diving, boating and recreational fishing, to keep these activities from adding to the stress of higher sea temperatures already affecting the coral reefs.”

There is also potential for similar conditions in the central Gulf of Mexico and a region stretching from the Lesser Antilles to Puerto Rico, across to the southern coast of Hispaniola and the Caribbean coast of Nicaragua. Other areas of concern are the central Pacific region including the equatorial Line Islands and Kiribati. Some heat induced stress may also develop between the Northern Mariana Islands and Japan.

Coral bleaching is associated with a variety of factors, especially increased ocean temperatures. This causes the coral to expel symbiotic micro-algae living in their tissues – algae that provide sustenance for coral. The loss of algae leaves coral tissue devoid of color, making it appear bleached.

The bleaching risk may in fact be higher in certain regions than in this initial forecast as the model used for the outlook does not account for El NiÃ±o, something NOAA’s operational Climate Forecast System indicates is likely over the next year. If El NiÃ±o continues to strengthen, this could increase the bleaching risk in the central to eastern Pacific and Caribbean. NOAA’s National Climatic Data Center also reported that in June the world’s ocean surface temperature was the warmest on record.