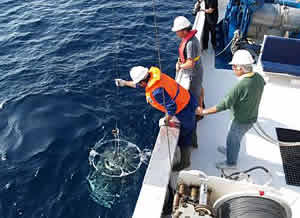 Temperatures and salt levels of the Western Mediterranean are on the increase.

MADRID, Spain -- Spanish scientists have analysed the temperature and salt levels of the Western Mediterranean Sea between 1943 and 2000 to study the evolution of each variable. Their research shows that, since at least the 1940s, the deep water has become progressively hotter and saltier, and that, since the 1990s, this process has speeded up. Each year the temperature of the deep layer of the Western Mediterranean increases by 0.002ÂºC, and its salt levels increase by 0.001 units of salinity. These changes, although minimal from year to year, have been continuously and constantly occurring at a faster pace since the 1990s.

The results are consistent, "but to confirm this accelerating trend, we need to monitor it over the years to come", Manuel Vargas-YÃ¡Ã±ez, main author of the study and researcher at the Oceanic Centre of Malaga of the Spanish Institute of Oceanography (IEO), assures SINC.

"These layers, especially the deep one, take up a huge volume, and raising its temperature each year by one thousandth of a degree requires an enormous amount of heat", the researcher points out.

The team has also observed an increase in the salt level and the temperature of the middle layer of the sea. This has not been clearly observed in the upper layer, "but it can be deduced from the heating of the deep water and from studies done by other teams and our current research projects", Vargas-YÃ¡Ã±ez states.

We need to monitor the sea

The research team compiled the data about temperature and salt levels by means of the MEDATLAS (Mediterranean Hydrographic Atlas) database, and using the IEO monitoring programmes. All the data were collected from the Alboran Sea, the Catalan-Balearic Sea, the Gulf of Lion, the Ligurian Sea, the Tyrrhenian Sea and the Algerian Basin, between 1943 and 2000.

"We need to support the networks that already exist and build new ones to monitor the sea. Only then will we be able to detect, in a reliable and effective way, the changes taking place in the sea", Vargas-YÃ¡Ã±ez concludes.