U.S. Home Searched in Connection with Diving Death of Honeymooner on Aussie Shipwreck 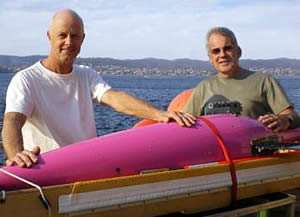 VICTORIA, Australia -- Scientists are celebrating the first successful deployment and retrieval in Australia of a remotely controlled, deep ocean-going robotic submarine destined to play a central role in measuring changes in two of Australia's most influential ocean currents.

Under the joint CSIRO Wealth from Oceans National Research Flagship and Integrated Marine Observation System (IMOS) project, the underwater ocean glider was launched in February on a two-month, 1,500 kilometre voyage.

The ocean glider was supplied through IMOS's Australian National Facility for Ocean Gliders facility located at The University of Western Australia.

The Integrated Marine Observing System has been developed as part of the Australian Government's National Collaborative Research Infrastructure Strategy.

With its porpoising motion and an ability to descend to a depth of nearly 1,000 metres, the $200,000 robotic glider is being trialled in the Tasman Sea and the Indian Ocean as the latest tool in Australia's $94 million marine observing network.

The glider's sensors measure temperature and salinity, as well a range of biological parameters including oxygen and turbidity.

"Ocean currents around Australia are critical to so many aspects of nature and human activity," Mr Ridgway says. "With the East Australian and Leeuwin Currents, we need to understand how they change from season to season and year to year, and the extent of their influence on local coastal conditions, as this affects climate, weather, fisheries, shipping and more.

"Increasingly, these autonomous gliders are being used by northern hemisphere marine research groups. Australia is just beginning to use these deep-ocean systems, although shallow water gliders have been deployed off Western Australia, South Australia and New South Wales in recent months. The Tasman Sea deployment was the first deployment of a deep-ocean glider in the southern hemisphere."

Together with data from research vessels, satellites and moored, drifting and expendable instruments, the glider will add a new dimension to profiling the oceans around Australia. But there are still challenges to be overcome.

"In a lot of ways this first deployment is as much learning how to pilot the glider and guide it through and around the eddies of the East Australian Current as it is getting about the data we want," Mr Ridgway says.

A recent innovation in oceanography, the winged gliders are programmable and guided by Global Positioning Systems. They glide during depth changes, driven by an inflated oil filled chamber. However, because the ocean currents can be faster than the glider's speed, ensuring they are not swept away has been a difficult process.

"The appeal of these instruments is that they are out working while the scientist can be assessing what is near-real time information about ocean conditions," Mr Ridgway says.

CSIRO initiated the National Research Flagships to provide science-based solutions in response to Australia's major research challenges and opportunities. The nine Flagships form multidisciplinary teams with industry and the research community to deliver impact and benefits for Australia.