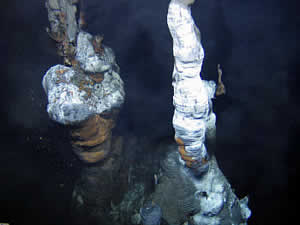 CORK, Ireland -- The Irish-led VENTuRE scientific expedition aboard the national research vessel RV Celtic Explorer has discovered a previously uncharted field of hydrothermal vents along the mid-Atlantic ridge â the first to be explored north of the Azores. The mission, led by Dr. Andy Wheeler of University College, Cork (UCC), together with scientists from the National Oceanographic Centre and the University of Southampton in the UK, NUI Galway and the Geological Survey of Ireland, returned to Cork today (August 4th) from an investigation 3,000 metres below the surface of the sea using the Remotely Operated Vehicle (ROV) Holland 1.

Hydrothermal vents, which spew mineral-rich seawater heated to boiling point by volcanic rock in the Earth's crust below, are home to a rich variety of marine life that thrives in complete darkness on bacteria fed by chemicals. The investigation was supported by the Marine Institute under the 2011 Ship-Time Programme of the National Development Plan and by the National Geographic Society, who filmed the work for inclusion in an upcoming National Geographic Channel series, "Alien Deep," premiering globally in 2012.

"On the first dive, we found the edge of the vent field within two hours of arriving on the seafloor," said Dr. Wheeler of UCC. "The ROV descended a seemingly bottomless underwater cliff into the abyss. We never reached the bottom, but rising up from below were these chimneys of metal sulphides belching black plumes of mineral-rich superheated water. Often the search for vents takes much longer, and our success is a testament to the hard work and skill of everyone on board."

Speaking from the RV Celtic Explorer in Cork, Minister for Agriculture, Food and Marine Mr. Simon Coveney said "This work is an example of an exciting new discovery made by the Celtic Explorer and its present crew of Irish and International scientists. Through vessels like the Celtic Explorer, Irish academics and scientists can work with other international experts to explore the sea bed in the Atlantic and make groundbreaking new discoveries. Ireland is positioning itself as a centre for marine research from a European and international perspective and this work should be supported and welcomed."

Dr. Bramley Murton of the National Oceanography Centre in the UK, who first saw clues for possible vents on an expedition aboard the UK research vessel RRS James Cookin 2008 and who led the mineralisation study on the expedition, said, "Our discovery is the first deep-sea vent field known on the Mid-Atlantic Ridge north of the Azores. Although people have been crossing this ocean for centuries, we are the first to reach this spot beneath the waves and witness this natural wonder. The sense of awe at what we are seeing does not fade, and now we are working hard to understand what our discovery tells us about how our planet works."

Patrick Collins from NUI Galway's Ryan Institute, who led Ireland's marine biological team investigating this unique ecosystem, is working in collaboration with Jon Copley of the University of Southampton to catalogue and characterise the species found at the vents. "Everyone on board is proud of this Irish discovery, which we have called the 'Moytirra Vent Field,' said Patrick Collins. "Moytirra is the name of a battlefield in Irish mythology, and appropriately means 'Plain of the Pillars.' The largest chimney we have found is huge â more than ten metres tall â and we have named it 'Balor' after a legendary giant. In comparison with other vent fields, Moytirra contains some monstrous chimneys and is in an unusual setting at the bottom of a cliffâa real beauty."

"Using the ROV's high-definition video camera, we've watched unusual orange-bodied shrimp crawling around the chimneys, among clusters of tiny green limpets," said Jon Copley. "Elsewhere there are writhing scale-worms, swirling mats of bacteria and eel-like fish â a riot of life in this unlikely haven on the ocean floor."

The mission carried geochemists, marine biologists, marine geologists, marine geneticists and technicians from Ireland and the UK as well as a TV crew from National Geographic. It was supported by the Marine Institute under the 2011 Ship-Time Programme of the National Development Plan.

"This project clearly demonstrates Ireland's capacity to undertake world-class marine research on a significant scale, a capacity created through strategic national investments in facilities such as the Celtic Explorer and the Holland 1," said Dr. Peter Heffernan, Chief Executive of the Marine Institute. "This targeted use of research funding by our organisation, which has enabled senior Irish scientists to lead this survey in partnership with international colleagues, has resulted in scientific discoveries of global interest which will enhance Ireland's growing reputation in deep-sea exploration."