Aussie Scientists Discover Underwater Ant; 'We Were Sort of Dumbfounded' 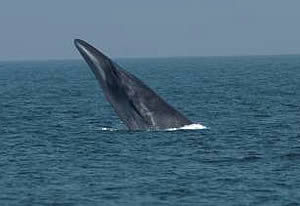 A rare photo of a Bryde's whale breaching in the Swatch-of-No-Ground, Bangladesh. credit WCS Bangladesh

NEW YORK, New York -- Saving the whales often means knowingâsometimes geneticallyâone group of whales from another, say researchers attempting to define populations of a medium-sized and poorly understood baleen whale that is sometimes targeted by Japan's scientific whaling program. In a new study, scientists from Wildlife Conservation Society, the American Museum of Natural History, Columbia University, NOAA, and other groups are working to define separate groups and subspecies of the Bryde's whale in the Indian and western Pacific Oceans.

By generating genetic information that allowed the team to discriminate among different Bryde's whales (almost akin to a 'bar code'), the research has confirmed the existence of two subspecies, one which is larger in size and inhabits offshore waters, and one that is smaller in size and frequents more coastal marine habitats. The study now appears in the latest edition of the Journal of Heredity.

"Very little is known about Bryde's whales in terms of where populations are distributed, the extent of their range, or even relationships among them at the population, sub-species and species levels," said Columbia University researcher Francine Kershaw, lead author of the study. "Our genetic research will help define these groups and identify populations in need of additional protection."

Named after Norwegian whaler and entrepreneur Johan Bryde, the Bryde's whale (pronounced BREW-dus) grows up to 50 feet in length. The species occurs in tropical, subtropical, and warm temperate waters of the Atlantic, Pacific, and Indian Oceans. In addition to scientific whaling, threats to Bryde's whale populations include ship strikes, fisheries bycatch, hydrocarbon exploration, and development in coastal waters.

The lack of knowledge on the Bryde's whaleâhow many species and populations there areâpresents marine managers with a conservation dilemma. The species is considered "Data Deficient" by the International Union for Conservation of Nature, and the International Whaling Commission grants Japan an annual take of Bryde's whales in the northwest Pacific Ocean through the provisions of special scientific permit. The quota for the 2012/2013 season was 34 Bryde's whales.

Working to fill in these knowledge gaps, the research team conducted an analysis of Bryde's whale populations in the Indian and Pacific Oceans by examining new genetic samples from 56 individual whales from the waters of Oman, Maldives, and Bangladesh. The team also used published data sets from Java, the coast of Japan, and the northwest Pacific in the study.

Specifically, the team examined nine diagnostic characters from the mitochondrial DNA material from each of the samples. In most instances, the researchers harmlessly collected skin samples from living whales using small biopsy darts launched from crossbows. Other samples were collected from beached whales and individuals killed in ship strikes.

The research team then examined the genetic material gathered from skin samples with a technique called polymerase chain reaction (PCR), used in this study to amplify specific regions of mitochondrial DNA (passed on through maternal lines of a population). They then carried out a statistical analysis to measure how genetically different individuals were.

The results of the genetic analysis confirmed the existence of two subspecies or types of Brydes whales, one coastal and one offshore, underlining the need to designate both subspecies as separate conservation units, with specific management needs for each type.

Further, the study revealed significant population structure for each subspecies between regions. According to the analysis, the larger offshore Bryde's whale populations in Maldives, Java, and the Northwest Pacific were genetically distinct from one another. The authors recommend that each population be considered a separate conservation unit.

The smaller coastal form of Bryde's whale showed extremely low genetic diversity, the lowest ever measured with baleen whale populations. Only a single maternal line or haplotype was detected in the 45 individual whales sampled in Bangladesh and Oman. This population, insist the authors, must be considered a conservation unit independent from coastal Bryde's whales found off Japan.